#TimeToVote: How voting made a long-lasting difference in 1904 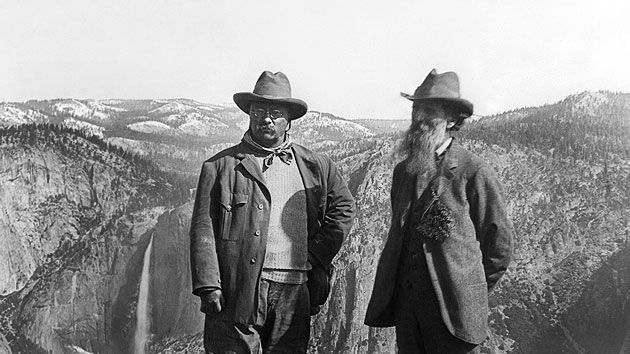 Imagine if voters in 1904 had elected Alton B. Parker as President. We might not have:

Fortunately, Parker’s message of putting an end to the “rule of individual caprice” didn’t resonate. His opponent, incumbent Theodore Roosevelt, was able to continue the work he’d begun upon assuming the presidency following William McKinley’s assassination in 1901. A significant part of that work would later establish his standing as the “conservationist president.”

A crucial time for the environment

Roosevelt came into office at a crucial time. Westward expansion had all but eliminated the once-vast populations of elk, bison, bighorn sheep and deer, and resources including timber, coal, iron and oil and gas were being consumed at an alarming rate.

“We have become great because of the lavish use of our resources,” Roosevelt said at the time. “But the time has come to inquire seriously what will happen when our forests are gone, when the coal, the iron, the oil, and the gas are exhausted, when the soils have still further impoverished and washed into the streams, polluting the rivers, denuding the fields and obstructing navigation.”

There were other issues in the election of 1904 — the gold standard, government spending, the Panama Canal — but Roosevelt’s feelings about our natural resources, “the most glorious heritage a people ever received,” were well known. As a youth, birding sparked his love of the land, while time spent at his ranch in the North Dakota Badlands in the late 1800s cemented his concern for it. With the support of the American people, as president he wasted little time protecting that land and its resources.

In 1905, for instance, he established the National Forest Service. The first tract of land purchased for a National Forest in the East (under the Weeks Act of 1911): Curtis Creek, located near Old Fort in the Pisgah National Forest. Today, North Carolina has four national forests — Pisgah, Nantahala, Uwharrie and Croatan — totaling 1.25 million acres.

The Federal Bird Reserves that Roosevelt launched in 1903 at Pelican Island, Fla., evolved into the National Wildlife Refuge System, which now has more than 560 refuges, including 11 in North Carolina. Our state’s nine coastal refuges are crucial overwintering grounds for a variety of northern waterfowl: they’re also a tourist draw during the otherwise slow winter at the coast.

And there’s the Antiquities Act that Roosevelt signed into law in 1906. According to the National Park Service website, the act obligates, by presidential decree, “federal agencies that manage public lands to preserve for present and future generations the historic, scientific, commemorative, and cultural values of the archaeological and historic sites and structures” on public lands. Probably the most currently well-known National Monument is the 1.35 million-acre Bears Ears in Utah, which was established by President Obama in 2016, and subsequently reduced by 85 percent by President Trump.

So committed to protecting natural resources was Roosevelt that in 1904 he sent 20 Marines to Midway Atoll to prevent the taking of birds and their eggs by Japanese nationals.

Votes that continue to count

In 1904, U.S. voters made it clear where they stood: Roosevelt was elected by a landslide, winning 56.4 percent of the popular vote. With that election, we were on our way to conserving 230 million acres of land. We credit Teddy Roosevelt with our legacy of public lands, but we should also recognize the 7.6 million voters who recognized the importance of their vote and kept him in office.

The result of their action, of their support of the “conservationist president,” continues to benefit the country more than a century later.

Learn more about the #TimeToVote initiative, of which we are a participant, here.

Learn how you can continue to vote (with your feet!) after the Nov. 7 election, here.