When the new Yadkin River Park is dedicated June 21st in Davidson County, Edgar Miller will be on hand to savor yet another victory in his organization’s bid to protect the Yadkin River Basin. At the ribbon cutting, credit will be given to a long list of organizations and individuals who made the park possible, from the Davidson County Commissioners, to Duke Power (which  provided a $100,000 grant to help make the park possible) to a local legislator who had a change of heart and decided to back the park, to TRIP (the local Tourism Recreation Investment Partnership that supported the project), to the NC Wildlife Resources Commission, which manages land along the river front. There’s a good chance that the Yadkin Riverkeeper may not even get a mention. Even if they do, the reaction will likely be, the Yadkin Riverwhat?

“We’ve been around since 2008,” says Miller, who grew up in the county and who became the group’s executive director in December. “We work to support local communities in their efforts to protect the river.” Often, that means playing a background role, providing everything from expertise on water quality issues to trash bags for river cleanups.

Their low profile is also due, in part, to the relatively newness of riverkeepers in general. Though the concept dates to 1966 and efforts by fishermen to clean the Hudson River, it’s only caught on as a mainstream conservation tool in the past couple decades. North Carolina’s first riverkeeper was on the Neuse; today, there are 16 riverkeepers statewide.

On the river, above the river

The riverkeeper’s role in protecting the state’s waters is wide-ranging. In the case of the The Yadkin Riverkeeper, the basin covers more than 7,200 square miles, from the Yadkin’s headwaters near Blowing Rock more than 200 miles downstream to where the Yadkin empties into Lake Tillery and becomes the Pee Dee. The Yadkin is the water supply for some 841,000 people; keeping the river clean requires the diligence of Miller working the policy end of things and Brian Fannon, the actual river keeper, who spends the bulk of his time paddling the Yadkin, walking its banks, and in periodic flyovers to get a bird’s-eye view of who’s doing what, all in an effort to get a real-time sense of the river’s health. Some of the YRK’s main projects include monitoring High Rock Lake for nutrients, algae blooms and sediment deposits; pushing the cleanup of coal ash from Duke Energy’s Buck Steam Station; and keeping an eye on the proliferation of CAFOs — Concentrated Animal Feeding Operations — that proliferate unregulated throughout the basin.

“On any given day there are 50 million chickens in the Yadkin River Basin,” says Miller, and there’s little in the way of state oversight to keep tabs on what these operations are doing. The Yadkin River Basin is also home to 40 percent of the state’s cattle farms.

Miller grew up in the area, on a farm in the Linwood community, so he’s well aware of how important agriculture is to the region. He also knows the importance of a clean water supply.

“We’re not anti-farming,” he says. “We just don’t want large operations with no permit and no idea of what they’re putting into the water.” As a result, Miller is encouraged by the growth of small farms in the basin, from a heritage guernsey cattle operation to 3- to 5-acre vegetable farms.

Those are the bigger, ongoing challenges. There’s also the constant little fires that continually flare. Earlier this month a landowner in Caldwell County decided to dump tons of debris from a church demolition along the river in an effort, neighbors told a local TV station, to shore up the river bank after recent heavy rains. On their Facebook page, the YRK noted that action was not only “unacceptable,” it’s “illegal. “We are in touch w/ local and state officials to assess it’s impact on water quality in the river and ensure it is adequately cleaned up.”

One of the Yadkin’s biggest blessings is also one of its biggest challenges.

“We call it the ‘hidden river,’ because there’s not much development along it,” says Miller. That’s good, he says, because it makes it easier to maintain and protect the stream buffers essential for filtering pollutants before they reach the river. The downside is that a lot of residents are only vaguely aware of the river’s presence. And that can make it hard to get people passionate about protecting it.

That, says Miller, is why the YRK this year launched its River ReConnect program, “to expand our outreach and hands-on educational programs and improve and enhance river access and recreational opportunities, particularly for young people and communities of color.”

That’s part of why the YRK became a champion of the Yadkin River Park. (It didn’t hurt, either, that Miller has been president of TRIP since 2011 and was intimately familiar with the park.) It’s also why the YRK has such an active program to get people on the river.

“We want to make it more accessible to the public for recreation,” says Miller. “It helps to increase public awareness about the river, and it also helps us to get the word out.”

Putting people on the water

For years, the YRK sponsored the Tour de Yadkin, a roughly month-long paddle running the length of the river. Participants could join for the day, for the entire paddle or for however long they liked.

“But we got to looking at it and discovered we weren’t getting as much out of it as we were putting in,” he says.

So this year, they created a series of daylong paddles, the 2019 Historic Paddle, which is open to YRK members as a way of thanking them for their support, and the Yadkin Riverkeeper Tour, as well a canoe and kayak race and several river cleanups.

“The Historic Paddles are a great way to say thank you to our supporters,” says Miller. Participants don’t even need a boat. “Thanks to Great Outdoor Provision Co.’s sponsorship, we’re able to provide boats to the members who need them, and a shuttle.” (One Historic Paddle, at Yadkin River Park, has already happened; below is a list of the upcoming Historic Paddles.)

Miller knows first-hand the challenges facing the basin, having grown up in Davidson County’s Linwood Community. Though he left the area for a while, first to attend Duke University (he has a bachelor of arts degree in botany and a Masters of Environmental Management from the university’s Nicholas School of the Environment), then to live in Washington, D.C., where he spent 12 years (10 as Director of Policy for the National Recycling Center and two as a lobbyist for the American Steel Institute), he returned in 2001. He spent 17 years as Director of Government Relations for the Conservation Trust for North Carolina, working with land trusts statewide. Now, he’s focused on the land where he was raised.

While he values the background role the Riverkeeper plays in helping local communities, he’d like to push the organization in a more visible direction.

And to introduce more paddlers to the wonders of the Yadkin.

Annual memberships start at $35 a year ($25 for students) and, again, get you on to the aforementioned Historic Paddles. Go here for more information on becoming a member 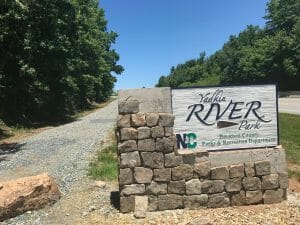 Headed to Charlotte on I-85 and about to lose your sanity? Take a break and visit Yadkin River Park. The park has about 3 miles of hiking trail, which visits Fort York, a Confederate era encampment above the river where you can still walk among the rifle pits and batteries. There’s also a boat ramp as well as the retired Wil-Cox Bridge, which dates to 1920. Edgar Miller, executive director of the Yadkin Riverkeeper, says the bridge is especially popular when retro trains from the Spencer Yards at the nearby N.C. Transportation Museum pass on the adjacent railroad trestle. Learn more about the park, off NC 29 along I-85, here.