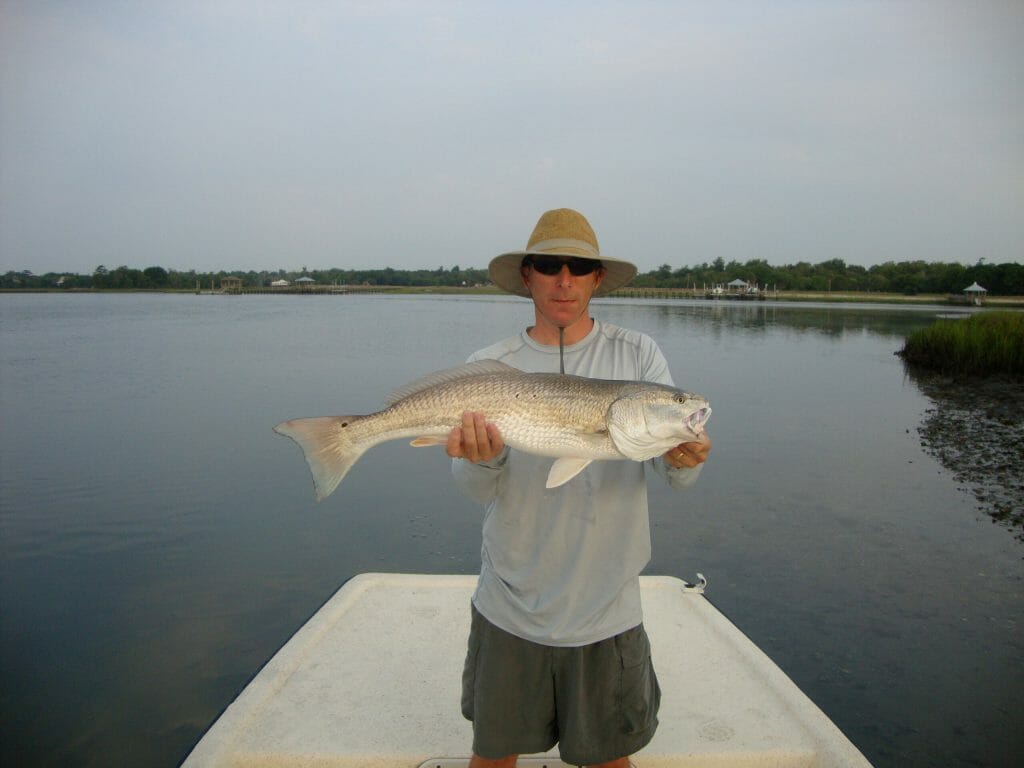 He’s on it! I hissed. Keep it moving steady… strip, strip, strip. As usual, I was attempting to coach one of my fishing buddies from the poling platform, as if anyone could miss the bulging hump of water tracking the fly. Events progressed quickly as the drum pounced and my fishing partner stuck the hook in him. A spray of water exploded from a seven pound drum now rapidly evacuating the flat. This recent encounter is typical for May, a time of year when drum move inshore in large schools. For the fly fisher lucky enough to find a big school, catching drum can simply be a matter of putting a fly in the water without spooking the fish. Unfortunately, giant schools of drum don’t appear often enough (for me anyway), so it pays to find other methods of locating fish.

When possible, sight-casting to fish is exciting, but it is not always an option. Fishing with poppers and sliders (a popper with a rounded face that “slides” across the surface, rather than chugging) for drum is an ideal technique for covering a lot of water with a fly rod. A drum that might never see a sinking fly will often move a fair distance to locate a fly churning on the surface. There are many effective surface patterns, but two styles in particular deserve special mention for the Cape Fear area. Joe Blados’ Crease Fly has an erratic motion in the water, and when motionless floats partially on its side like a stunned baitfish. Gold is a favorite color, especially in turbid water. The other pattern I favor is a deer hair slider. Ron’s Rattlin’ Mullet and Dahlberg’s Dilg Slider are two examples of this style of tying, which features spun deer hair trimmed to shape. The effect is a soft body fly that wakes along in the surface film, rather than floating up high like a foam or cork body. With a steady retrieve, a slider strongly resembles a finger mullet waking along the surface. Natural tan, olive, and black are all good choices in this pattern.

There are many options for covering water with surface flies. Working an area with two people, one poling while the other makes long casts is effective in shallow water. Focus on points, oyster reefs, grass edges, creek mouths or any other structure that might hold drum. The same method may be applied using a trolling motor, either alone or with two anglers. The other option is to set the boat (either with an anchor or by wedging it onto a bank) in a position to cast over a specific area. The key to success lies in making long casts, and working the fly with a steady retrieve. Drum will often push a wake behind the fly as they chase after it. Be sure to keep the fly moving until you feel the fish on the fly with your line hand…setting the hook with the rod will result in a lot of missed strikes.

As always, be considerate of other anglers, especially on the flats. There is plenty of water available to share, so find another area if you see someone has already staked out your spot. Besides, you might just find that giant school of drum around the bend if you explore new water. Try your favorite surface pattern, and get ready for that big wake plowing after your fly.