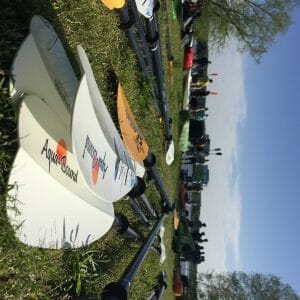 By the time Karen Szypulski finished taking the Intro to Kayaking class at Cary’s Bond Park in June of 2012, she was hooked.

“I was ready to buy my own boat,” says Karen. “Then our instructor, Wes, mentioned that Great Outdoor Provision was having a boat demo at Lake Crabtree in two weeks.”

Karen called the Cameron Village shop to RSVP, mentioned she wanted to try a beginner kayak. That’s important, because the fleet of demo boats and standup paddle boards we bring to each boat demo is based on customer demand.

“Preferably, people who are interested in attending will call ahead and tell us what kind of boat they’re interested in,” says Chris Garrett, Manager of Paddle Sports at the Cameron Village store. “We generally bring a good range of boats.”

“I was just interested in an entry level kayak,” says Karen. She explained to the boat wranglers her interest and price range, they put her in an appropriate boat, she went for a short test paddle.

She took three more test paddles in increasingly more sophisticated boats, each more and more to her liking. Then she took out a fifth, a P&H Delphin 155. It was love at first stroke.

“I knew after about the second time the paddle hit the water that this was the boat,” says Karen.

That’s the goal of the program, says Chris. “We try to take the guesswork out of what is a big purchase for most people.”

Ideally, a customer will call the local store sponsoring the boat demo and request either a specific boat or type of boat — touring, fishing, recreational — that they’d like to try.

About 30 boats are brought to each demo, more if vendors attend and bring their own fleet. The demos typically run from 4 to 7 p.m.; paddlers are checked in, given a pfd, paired with the boat of their choice.

“Some people have a pretty good idea going in what boat they want,” says Chris. “They just want a chance to paddle it first, to make sure.”

Others, like Karen, think they know what boat they want. Once they try different boats, however, their thoughts can change.

Test paddlers often have their preconceptions challenged by the experience. “People are usually surprised by how stable fishing kayaks are, and how longer boats are built for speed,” says Chris.

The most frequently requested boat: fishing kayaks. “They make up about half the boats we bring,” says Chris. Recreational kayaks are the second most popular category. Great Outdoor has 145 demo boats in its systemwide fleet.

Walkups are also welcome, says Chris. For that reason, they always bring at least one entry-level boat, for the paddle-curious.

If you try a boat and like it, we’ll survey our inventory and see what we have in our system, says Chris. With 250 boats in stock in the Triangle area alone, Chris says you can usually pick up your new craft pretty quickly.

In Karen’s case, she was on the water within a week. She didn’t wind up with the boat she thought she wanted, and she ended up spending considerably more than she’d initially intended — about 5 times as much. But the way she looks at it, those two hours spent on the water testing saved her about two years of buying and selling boats as she ascended the kayak food chain.

“I may buy a different kind of boat, but I will never replace this boat,” says Karen. “I love it.”

Of the demo-day concept, she adds, “There was no sales pressure. Every time I wanted to upgrade it was my idea.

“It was such a positive experience.

Demo days have been held so far this year in Charlotte, the Triad and the Triangle, and in Charlottesville and Virginia Beach, Va. One remains on the calendar:

Can’t make the last demo day of the season? We also demo boats individually. You’ll need to have a specific boat in mind, and there is a fee, based on the price of the boat being tested. Like the boat and the fee is deducted from the purchase price.