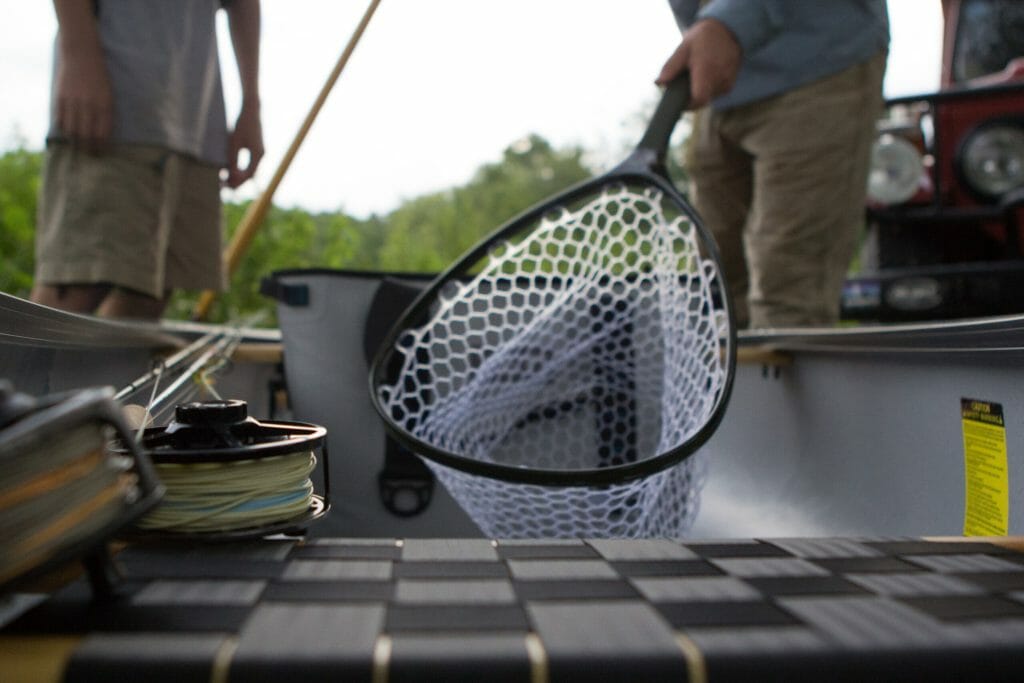 By Alex Webb
Reprinted with permission of the News & Observer.

RALEIGH — The parking lot at Lake Wheeler was nearly full as Collins Chalmers pulled in Saturday. She was running a little late.

A rowing competition was scheduled, but Chalmers wasn’t one of the women there to glide across the water in a sleek rowing shell. She was there to learn about an equally graceful sport — fly-fishing.

The 11 students gathered that morning in the classroom at Lake Wheeler were there to learn about fly-fishing from Scott Wood, a buyer and instructor with The Great Outdoor Provision Company in Raleigh.

The nine men and two women were mostly novices in a sport that can be intimidating, conjuring images of anglers prowling Florida flats for bonefish or wrestling giant salmon waist-deep in a cold Alaska river. Most of these students were there to satisfy their curiosities about the sport and to learn enough skills to be confident in trying it on their own.

Wood’s first experience with a fly was in Lead Mine Creek in Raleigh 25 years ago, and the experiences expanded when he turned 16.

“When I got my driver’s license, I headed to the mountains for trout and was obsessed with them for years,” Wood, 38, said. “Now, I’m hooked on saltwater fishing for drum, Spanish mackerel and false albacore. I also like to experiment with oddball species [on a fly] like amberjacks [which usually are caught in deep water]. Around here, I fish for bass in a local pond and take a john boat to the Roanoke River for stripers and shad.”

As with many fly-anglers, Wood’s love for the sport goes beyond catching fish. He visited Labrador, in eastern Canada, this past summer with a friend, writer T. Edward Nickens, who documented the trip in an article for Field & Stream magazine’s April issue. This was his most exciting fly-fishing expedition, searching for wild brook trout on the Kanairiktok River.

“We fished the headwaters of the river by canoe. We were truly fishing for fish that had never been fished before,” Wood said. “There was no anecdotal or physical evidence that anyone had ever been there. The only trails were caribou trails.”

Fly-fishing student Steve Colbert, a 43-year-old forest and soil scientist from Raleigh, was familiar with his instructor.

“I met Scott five or six years ago when I wandered into the store,” Colbert said. “I knew right away he really knew what he was talking about, and I did go fly-fishing five or six times.”

That’s something Colbert is preparing to do again.

“Now that my kids are a little older, I can sneak away for a couple hours to go,” he said. “If I catch a fish, that’s just the icing on the cake, I just like being outdoors, the Zen of it. So I came here to learn some more, and, with this course, I can hopefully get my feet wet again.”

Chalmers, 46, also from Raleigh, said she came to preserve her marriage — sort of.

“We are planning a trip to Montana this summer and will fish the Madison River and maybe the Snake River. … My husband fly-fishes, but I thought it was very good not to take lessons from my husband,” she said with a grin.

Wood shared his own experience on that topic. “That’s the rule at my house, too,” he said.

Chalmers also thought it would be more efficient to learn from a classroom setting.

“In one day they cover all the basics, and I can then go home and discuss them with Tim [her husband],” Chalmers said. “Tim and my son, Miles, are so excited about the trip.” 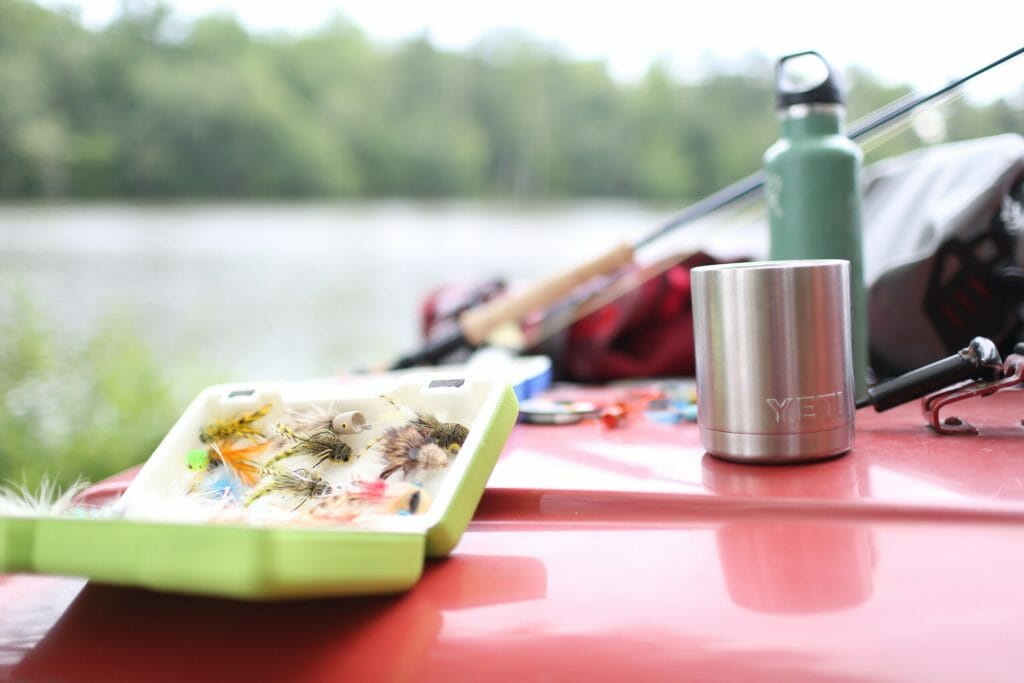 This first class of the season also included Jeff Hamm, a software engineer from Raleigh.

“I am basically an offshore fisherman and wanted to expand my knowledge,” Hamm, 37, said. “When I was about 7, my dad taught me to fly-fish, and I’m here to get rid of my bad technique. … I want to get some good habits for a trip to Florida next week. My dad and I are going bonefishing.”

Most of the students in the full-day class had signed up themselves, but Randy Hingson of Clayton was surprised by his family.

“I used to play golf but got tired of coming home so sore and thought I would try something else to relax,” said Hingson, 56, owner of the White Swan Barbecue restaurant in Clayton. “… I have always done some fishing but thought this would be a little more challenging than putting a worm on a hook. A friend took this class last year and told me about it, and the kids gave the school to me for Christmas — and Santa even brought me a fly rod. I’m going to the mountains totry it next weekend. I am looking for the basics so I can go to ponds in the area. It’s a skill you have to work on.”

Wood, assisted by Michael Grant, 29, a salesperson at the Great Outdoor Provision Company, started the class by saying, “I want to get you to the point that you can do this by yourself and have the confidence to tie knots, pick the right flies and cast well. You will not come out of class as an expert, but you will be ready to get started. We are always available to follow up either at the store or on the phone.”

This was exactly what Norman Storwick, a 35-year-old actuary from Raleigh, had come to hear.

“I signed up for the class because I want the comfort to go by myself. I have picked up a rod in the backyard but never fished with it, just enough to pick up some bad habits,” he said.

As close as Storwick was to a total novice, Todd Zarzecki, 28, of Raleigh is a self-proclaimed one.

“I’m a total novice,” Zarzecki said. “I work with Scott and Michael at the store. I’m in paddle sports but wanted to expand my knowledge for myself and the company.”

As Wood polled the room for students’ interests and skill levels, five held up their hands for trout, five for bass and panfish and five for saltwater angling. Two expressed very serious interest in fly-fishing and had some experience.

Teaching the fundamentals in a class of mostly novice fly-anglers was essential because of the basic difference between fly-fishing and all other types of rod-and-reel fishing. With conventional gear, the angler casts a lure, dragging the line with it, but when using a fly rod, the angler casts a heavy line, taking the lure with it. Understanding this concept allows the angler to put together a rig in a logical way, depending on conditions, species, size of the quarry and type of water.

The different weights do not refer to line-breaking strength but to the size and weight of the line, which should be matched to the rod — 4-weight line on a 4-weight rod, for example.

Having learned the basics of line and rod, the students headed to the sandy beach, which presented another challenge — wind blasting across the lake at nearly 20 mph.

“You can, with the proper technique, cast in a wind like this,” Wood reassured the students.

He demonstrated feeding the line through the eyes on the rod, a seemingly innocuous task until one attempts to see the nearly invisible leader. Wood’s tip: Fold the heavy, highly visible fly line and feed it through the eyes.

Casting, although not difficult, does take good instruction. Without proper technique, casting can become an exercise in futility.

At first, it was hard to tell if the froth in the water was from the wind or the students’ lack of technique. Within 30 minutes, though, each student was adequately laying the line on the water.

The act of “presenting” a fly is perhaps most important while fishing for spooky trout in a small stream; any slight movement can send a nervous trout to cover. A fly rod, properly loaded and rigged with a tapered leader, best exemplifies the true purpose of modern-day fly equipment: the presentation.

As these students found out, most fly-fishing will never require a delicate presentation of line, leader and fly gently rolling across the surface to meet the rise of a wild brook trout. That’s because so many other species are readily available and very willing to inhale a fly.

Fishing for bluegills on the full moons of spring requires little finesse; not easily spooked and ever wanting to rid their spawning beds of intruders, panfish are easy targets. At the coast, bluefish will bite anything while on a blitz for baitfish.

Still, the beauty of a fly line, laid out in mid-air behind an angler, then flowing forward in a perfect cast gives the angler the satisfaction of having learned a skill. And, as students in the class expressed, the exercise is not for the catching but for the experience and the grace of the fly.