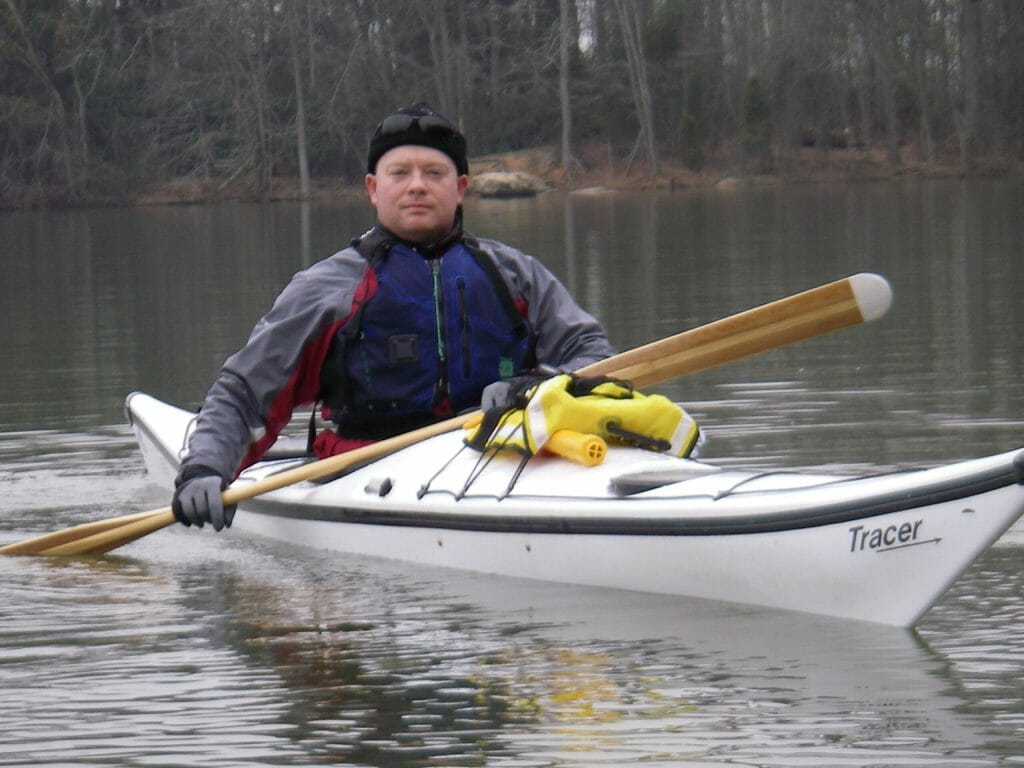 by Gwen Crabtree
When I first saw people paddling with Greenland style paddles I laughed at them and called them names. I wondered why these folks were not progressive, why they did not get with the program and use the latest and greatest new paddles on the market. After all, these paddles have been evolving for about one hundred years. With all our cool engineering and space age materials, they must be better than the “sticks” those traditionalists were using.

One of my customers had been doing some research on the Greenland paddle and wondered if we carried them. We had an old Sawyer version that had been sitting around forever, so I grabbed it and the customer and I took it for a test drive. Paddling with it took a little getting used to but when I rolled with it I came up with such force that I instantly capsized again. From that point on, both he and I were hooked. The thing that struck me most was how much more fun kayaking had become by paddling with a stick.

We started stocking the Betsie Bay Kayak Inuit, Greenlander and Storm paddles. Each paddle is hand crafted by Al or Betsie Anderson up in Frankfort Michigan. I learned some basic techniques from videos and magazine articles by John Heath, but my formal introduction to these paddles came straight from the source. I attended the Annual Delmarva Paddlers Retreat where Greenland style kayaks and paddles reign supreme. Kaleraq Bech, the president of Oaannat Kattuffiat, the Greenland National Kayak Club was there. Other Greenland enthusiasts were on hand to give lessons. Under their instruction I learned what had been passed down through the generations from the fathers of kayaking.

I learned that these paddles evolved over thousands of years by a people whose very lives depended on their equipment and their skills to survive the harsh sea and weather conditions around the Artic circle. For them paddling was not a hobby or recreation, but a way of life in which their personal survival depended. Hunting from a kayak put extra demands on a paddler who had to be ready for every possible contingency. These paddles are pretty high tech to be so old and so simple. Too sum it up; the primary requirements of a good paddle were efficiency and safety. A paddler could not afford to get tired. If he did, he would make mistakes. And if you made mistakes, you did not come home.

For example, let’s look at rolling. When paddling with the Greenlanders, I asked if they would help me with my roll. They asked me to show them what I could do and I executed a text book C to C roll with a powerful hip snap. Thinking they would be pleased, I was shocked at their criticism. They said I had wasted too much energy. They explained what would have been an excellent roll in white water conditions was not appropriate for sea conditions. What ever conditions that made one capsize at sea were waiting to do it again upon completion of a roll. This may lead to multiple capsizes and rolls before one can paddle out of these conditions. Multiple rolls lead to exhaustion and trouble. The Greenlanders then taught me an “effortless” roll that is a slow, smooth righting of the kayak that requires very little energy. One appears to be rolling in slow-mo.

The same goes for paddling. Efficiency is everything. So the size and shape of the paddle evolved from these and other considerations and not because the only drift wood on the beach happened to be 2” x 4”s.

Let’s take a look at what makes these paddles so different. First the long narrow blade shape is not as sensitive to wind from ANY direction. The cross section of the blade is aerodynamic in shape. With a strong beam wind, the blade is “feathered” so there is no danger of capsizing from wind lifting the blade as on the newer feathered paddles.

The blade is also hydrodynamic in shape. When it interacts with the water the results are more like a propeller and less like a paddle wheel. By slightly cocking the top edge of the paddle forward, the blade behaves drastically different once immersed. Of course, I asked the Greenlanders how many degrees of angle to cock the blade. They laughed and made a comment about Americans and our desire for perfection. “Experiment. You’ll know when it is right by the way it feels,” they said. When the blade enters the water, it instantly dives and grabs the denser water for a better “grip”. If one is in the surf zone, the blade bites the denser green water instead of the aerated white water close to the surface. The forward cocking blade is then moved aft with no flutter because of the angle. As the blade is recovered it moves through the water again at an angle. Because of its shape and the “angle of attack” the blade performs like the blade of a propeller creating a pulse of forward momentum that is “free”, requiring no extra energy. This is enhanced due to the buoyancy of an all wooden blade which wants to pop out of the water on its own. All the paddler does is control the movement. At the end of a long day of paddling requiring 10,000 strokes the paddler receives a bonus of 10,000 pulses of forward motion free. I thought that sounded like so much bull until I tried chopping the water vertically with the blades abeam and cocked to the sweet angle. The kayak started moving forward with out my paddling.

Another attribute of the design is how user friendly it is. The learning curve is a piece of cake for a new paddler. The veteran paddler will have to unlearn a few things. This makes for an easy learning curve for the novice. The paddle has a natural, intuitive, symmetrical design. There is no upside down or backwards. There is no left or right hand control and no feathered blades. Just grab it and go, not worrying about this or that, even underwater.

The Greenland paddle is a multi-purpose TOOL. It was not just designed for propulsion, but also for a skill-linked system of uses for handling high winds, maneuvering, preventing capsizes and capsize recovery.

For example, the blade is designed to fit in the palm of your hand. This allows for what is called a sliding stroke for extremely high winds with almost no wind resistance on the offside blade. Extended sweep strokes allow the paddler to bring the bow of the kayak through the wind, when normal sweep strokes are not powerful enough. Extended sculling strokes help maintain stability during group rescues. Extended high and low braces can be used in extreme conditions. Finally, the extended paddle roll is the ultimate “bombproof” roll when all else fails and one is running out of air.

The all wooden construction is aesthetically pleasing. Not only does it look good, it sounds good. One can hear and feel the interaction of the water with the blade coming up through the shaft. In addition, the wood is warm to the touch. Its flexibility relieves stress on the fulcrum (your body) created by the lever (paddle). With all areas of the paddle shaft and blades being buoyant, it not only leaps out of the water upon recovery, but naturally seeks the surface when setting up for a roll.

When rolling or sculling the extreme lift created by the blade design makes these skills easy to learn, maintain and execute. Most Greenland style paddlers spend as much time upside down in their kayak as they do right side up because they are having so much fun effortlessly sculling or rolling up their kayaks.

Finally the un-feathered blades require no separate “off side” feathering skills, rolling skills, etc. There is also less chance of use injuries to the wrist or elbows joints through poor feathering technique.

So, is the Greenland paddle “The Perfect Paddle”? There may be no perfect paddle for everyone. But don’t scoff at those who use it like I did. Give it a try and give it some time if you are a veteran paddler. You have to get used to the difference between a propeller and a paddle wheel. You may not win any races, but you will have more reserve energy than your competitors at the end of the race.

The Greenland paddle is all about energy efficiency and safety. Remember, it is not just a means of propulsion, but a paddler’s TOOL for a skill-linked system of uses for handling high winds, maneuvering, preventing capsize and capsize recovery.

If you want to learn more about technique or which paddle is correct for you or how to make drip rings, etc come by the Charlotte Shop and ask for Gwen. For on the water opportunities we have several options. ?