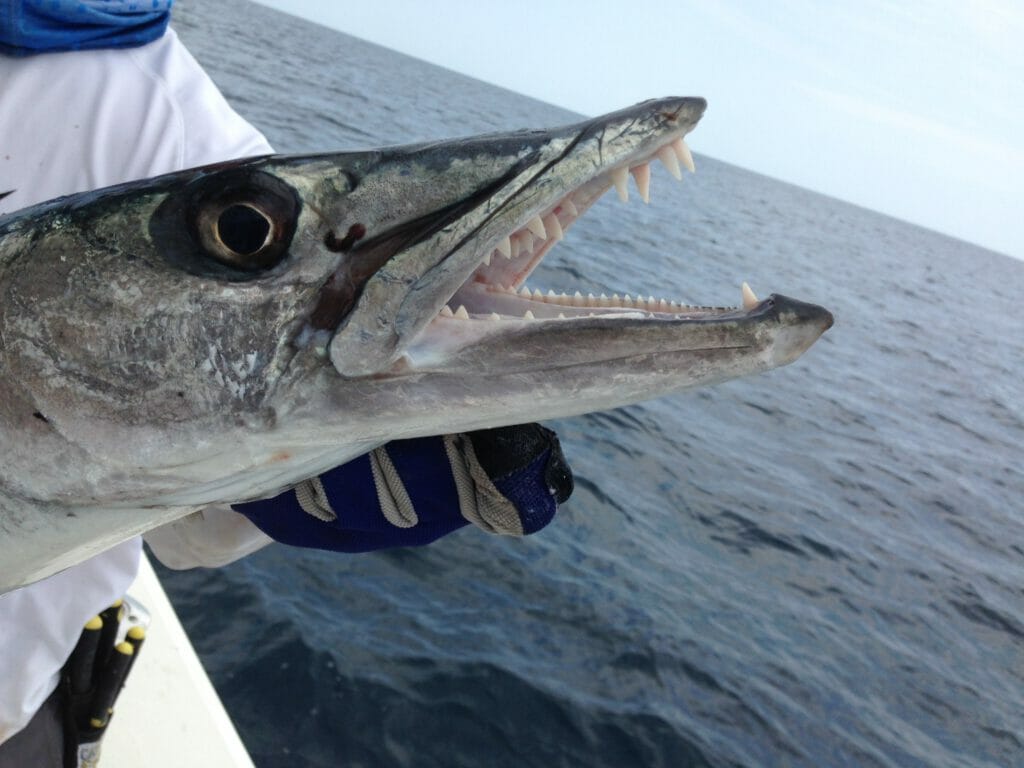 That was a mini albacore, I said to David. I thought he fought too hard to be a spanish, he replied. A moment earlier, we watched the foot long false albacore churn around the boat, his tail sputtering like one of those wind-up bathtub toys. All that remained now was a dark cloud of blood, spreading from the spot where a big barracuda nailed him right against the boat. The first spanish mackerel we hooked later that day didn’t make it as far as the boat before being mauled by a barracuda. It was time to do something about this problem the best solution we could come up with was to try to catch one.

Barracuda can be extremely aggressive when there is a struggling fish on the end of a line. Convincing one to strike a fly, especially in clear water, is a bit more challenging. Looking for something different to catch (for me anyway), I started trying to catch big cudas on the wrecks around Wrightsville Beach several years ago. There are plenty of them around this time of year. Almost any wreck or other structure will hold one or more barracuda. They are fairly easy to spot, as they tend to cruise near the surface a long, brown profile visible from a good distance. If a buoy marks the wreck, there will often be barracuda holding almost right on top of it.

Barracuda like flies that are long and skinny, with lots of flash. I use a pattern that has a trailer hook attached with wire, so that the hook is located at the tail end of the fly. With the wire contained in the body of the fly, there is no reason to use wire in the leader, because barracuda almost always bite the middle or end of the fly. Not using wire in the leader makes it easier to tie the fly on, and also makes the leader less visible to the fish. The body of the fly should be about 6 to 8 inches of accent flash, in silver and green or pearl and green, with big eyes in the front. A finished pattern will somewhat resemble a needlefish.

Getting a barracuda agitated enough to attack the fly usually takes some preparation. It requires two people using some method of bait and switch. The simplest technique is to cast an artificial plug (either a popper or tube lure without hooks) on a spinning rod. One person reels the plug to the boat quickly, while the other gets the fly ready. Once a cuda gives chase, the plug is yanked out of the water and the fly is thrown into his path. If the fish is reluctant to commit, try ripping the plug through the water in a figure eight pattern next to the boat. If they get excited enough to start attacking the plug, they will usually go after a fly thrown into the mix. When a cuda is after the fly (they often track behind it with their nose almost touching), it is important to keep the fly moving at a moderate speed, but the action is often too close to the boat to make this easy to do. If you run out of room to retrieve the fly, move the rod tip at a steady pace, and walk your way around the boat if necessary. The other option is to rip the fly in figure eights, as you would a teaser plug. Either method will often keep the fly moving long enough to trigger a strike.

Artificial plugs work as teasers with some barracuda, but some of the more educated ones (those exposed to lots of fishing pressure) will only respond to live bait. A small, live bluefish is an ideal teaser. They can either be stitched to a swivel with floss, or put on a small hook on a spinning rod. As with a plug, you should take the bait away from the cuda and replace it with a fly. In this case, a fly that more closely resembles the bait (try a large deceiver-type pattern) is best, with a short section of single-strand wire in front of the fly. If the cuda grabs the bait before it can be taken away, try to pull it away (or whatever is left) and get the fly in front of him. The fish is often excited enough to continue looking for something to attack after it chops a bait in half. The greatest challenge in a bait and switch for barracuda is matching your reflexes against theirs. They are incredibly quick, but if you learn to read their behavior, you can sometimes anticipate their moves and hopefully hook one.

The fight is explosive, with a powerful first run including some spectacular jumps. As barracuda are built more for speed than endurance, the fight doesn’t last long after the first few runs. A 9 or 10 weight fly rod matched with an intermediate fly line is best suited to this type of fishing. It will handle large flies, and is rigid enough to rip a fly in a figure eight pattern when necessary. Also, most of the barracuda in our area are very large, so you need enough fly rod to fight them effectively. Your reel should have a smooth drag to handle extremely fast runs. Landing one is a two-person job, as it should be with any large, toothy fish. If you need to add some excitement to your fishing, try to find some barracuda this summer they won’t disappoint.