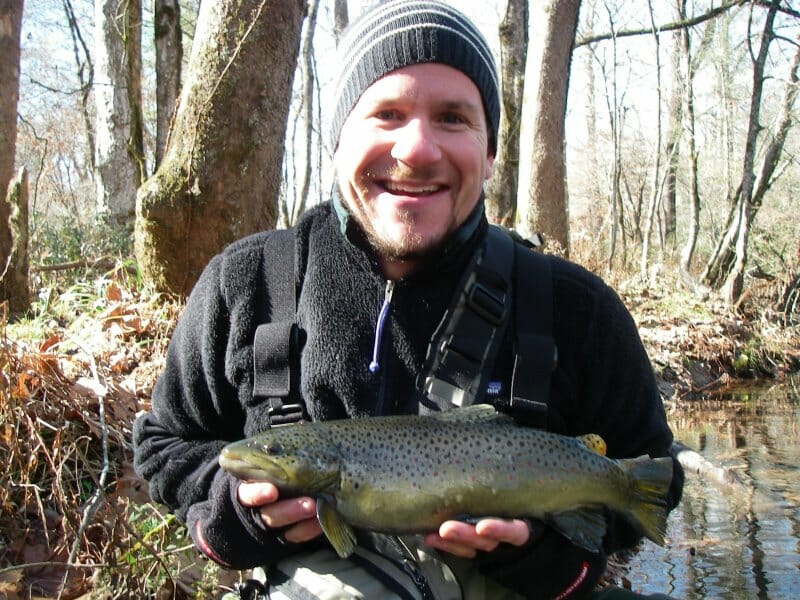 “An undisclosed spot in Western North Carolina.” That’s how I refer to this gorgeous, out of the way trout stream I visited recently. Oh sure, it has a name and a lot of people know about it. After all, I found out about it on the Internet! I just don’t want anyone else to hear about it. From me, anyway.

We fly-fishers are a contradictory bunch. On one hand, we want to hear all about someone else’s favorite stream, how to get to the best holes on it and which fly the big ones there are taking. A detailed map is nice, too.

On the other hand, we don’t want to give up any information about our favorite spots. Not that I haven’t given up some pretty nice spots over the years, just ask any fly fisher that comes into our store. If I know someone and trust him or her not to blab it all over tarnation, why not tell them? Maybe they’ll give me a nugget some day. I just don’t give it up to everyone and those I do tell I swear to secrecy. I never divulge a spot given to me in confidence.

Once I even blindfolded a friend as I took him to a secret bass pond.

The bottom line on this one, though, is that it’s gonna stay undisclosed. Why? Because its one-hell-of-a brook trout stream, that’s why.

It’s an understatement to say I like to fish for brookies, or specs, as some call them. When I think of brookies and the pursuit of them my eyes glass over and I start looking like the Cookie Monster thinking about an Oreo. There is nothing like holding a brookie in your hands, marveling at its perfect form and then sliding it back into the water unharmed. The experience is even better in the fall when they spawn. Their vivid colors even more intensified.

I feel responsible for this area in some way. Native brook trout streams are precious jewels that deserve our respect and care. North Carolina once almost lost them all. I sure don’t want that to happen again.

When I read about this location, I was intrigued. The place is shrouded in mystery and has a reputation for being rattlesnake-friendly. I immediately made plans to go there on my yearly winter fishing trip. Cold, yes. Snakes, no!

I went to the DeLorme Gazetteer and the NC Wildlife Commission resources to learn as much as I could about where I was going and how to get there. My wife knew where I was going and when she could expect a call from me at the end of the day. You have to be extra careful when you’re out there alone. If you get hurt, cell phones usually don’t work in the backcountry. Let people know where you’re going, what you’re doing and when you’ll check in.

It’s about a 7-hour drive from Wilmington, where I live, to this location. I camped-out the first night next to a nice river – the water’s sound carried me off to sleep. The weather was beautiful, considering it was February. The nights got down to about 25 degrees, but the days rose to a sunny 55. Perfect, perfect, perfect.

Now, one has to be flexible about this camping thing. Sometimes you want to get away and lose yourself in the mountains for 3 days with nothing but a backpack, dehydrated food and GORP. Sometimes, though, you just want to fish, sleep and eat. That’s what this trip was all about so, the next morning, I got up, broke camp and went to my favorite Huddle House for breakfast. I mean, it was 25 degrees.

French toast, grits and 3 cups of coffee later, I headed to the local fly shop. I knew how to drive to where I was going but had no idea where to go once I got there.

The fella at the shop drew a map of my valley destination and I bought a handful of flys in return. I just don’t feel right getting free fishing information from a shop owner without spending a few bucks on something while I’m there. His map looked a bit sketchy and thin on detail, but I left full of hope.

Sometimes that’s the way it is with maps. Most of the time, when using a DeLorme map, for instance, you’ll be fine. I haven’t gotten lost using one yet. However, with hand-drawn maps from friends and guys at fly shops you have to be careful. A person’s “mile” might be way different from actuality. Sometimes, too, you might not have the necessary vehicle to actually get you to where you’re trying to go. That’s happened to me in my Saturn coupe more than once. That’s when you vow to buy yourself a 4-wheel drive next time. Most of the time, though, the map-drawer’s memory isn’t quite up to remembering all the details that need to go into a map. It’s a good idea to try to “make sense” of a hand-drawn map by comparing it to some published map, if you can. Then, if you can’t make sense of it, go with hope.

When I got to the trailhead it was about 10AM. The sun was shining and the temperature was getting tolerable. I loaded my daypack with my waders, boots, gloves, rain gear and lunch and headed out. It took about 45 minutes to get into the valley and the scenery on the way down was breathtaking. Leafless trees stood starkly against snow-covered rock face hundreds of feet high and millions of years old. It was beautiful. I couldn’t have asked for a better day. Gorgeous scenery aside, though, I was there to fish and still hadn’t heard the sound of water rushing over rocks. I was beginning to have serious doubts about my fly shop map.

After another 20 minutes of trudging down the trail I stopped. Am I lost? What do I do now, keep going? Turn around? Damn map.

Wait, what’s that? I faintly hear something. Water? Yes! It’s…right next to the trail. I had been walking next to it for who-knows-how-long and hadn’t heard a thing. I poked my head through the thicket between the trail and the water and, wow, there it was! Like nothing I’ve ever seen before in North Carolina. The streambed is almost all sand. There is only an odd rock scattered here and there and virtually no sound of moving water except for an occasional babble.

It’s also small, which is one of the things about brookie streams. They’re in the high country, they require some walking to get to and they’re small and sometimes hard to fish. At this point, the stream is no wider than 10 feet across, very shallow and gin-clear. The rhododendron canopy over the water is dense. I see no visible holding area so I turn around and walk back upstream looking for better water. I hope there is some.

Again, I loose the stream. It has silently meandered from the trail. Damn map.

I walk 15 more minutes, turn left, cross a bridge, again find the stream, turn right onto another path, walk for another couple of hundred yards and “whoa”!

Now I know how Lewis & Clark felt discovering whatever it is they discovered. There, in front of me, the stream has widened to a pool about 90 feet across. At the far end a small waterfall cascades into it. There is ice and snow on most of the ground, light is shimmering, the sky is sunny and Carolina blue. Could it be a more beautiful winter day? Yes, with trout.

I ate a sandwich as I donned my gear, then, carefully, stepped into the water. The main flow of the stream was making a nice tumbling run into a shallow pool off to the right. I didn’t see any fish in the tail of the pool so I waded lowly and slowly over to the little pool. One needs to use stealth tactics at times like these.

And, there they were. A pod of little specs lined up and picking off nymphs as they washed into their feeding lanes. There were about 10 or 12 and, over the course of the next hour, I landed and safely released each one. They hit size 16 and 18 Hare’s Ear and Pheasant Tail nymphs and a small orange egg pattern. The water was so clear I could see every take. Not one of them was more than 9” long, but I didn’t care. They were brookies, the only trout native to our mountains. I also caught a few more just upstream of the waterfall, but the footing was so slippery with the ice and snow I didn’t get too far.

The walk out was tough. It was all uphill and very rocky. Funny how I hadn’t noticed that as I walked in. The temperature was getting colder as the sun went down, but I was prepared. When I got back to the trailhead I stowed my gear and headed off to find some dinner. And, yes, as soon as I had a signal on my cell phone I called my wife and let her know I was ok.