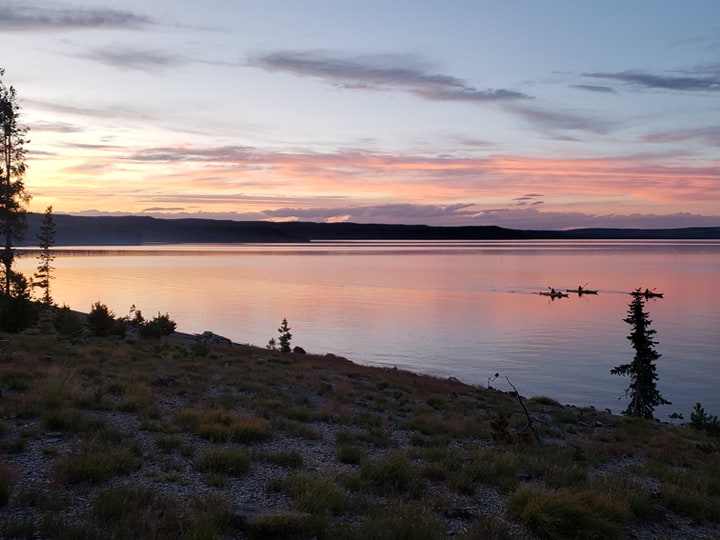 Sensory Overload.  You are in a strikingly beautiful place.  How much of the panorama can you visually take in?  Seated in the cockpit, I absorbed the immensity of my surroundings.  Our lime flotilla of plastic tandem sea kayaks glided gently through still morning waters.  Orange paddle blades created contrast with the azure of the lake.  My wife Charlotte in the fore kayak cockpit controlled our cadence.  In the aft cockpit, I fell in time with her paddle strokes and added minimal forward thrust.  We were in no hurry.

At 7700 feet on Yellowstone Lake, we were on the largest high elevation lake in North America.  Lake Tahoe is larger, but not as high.  The area of Yellowstone Lake for this sea kayaking adventure was the West Thumb.  Volcanic activity carved out this part of the lake 70,000 years ago, eons after a moving glacier had ground out an area of the collapsed caldera to form the main lake during an ice age.  We were kayaking atop a supervolcano.

Our outfitter for this morning paddle had set a float plan.  We were on our way to the West Thumb Geyser Basin, one of eight major thermal areas within the park. One allure would be to observe thermal activity from the water.

Our vessel for this journey was a Wilderness Systems Polaris 180T.  With a width of 29 inches, this kayak was very predictable and stable.  The water temperature of the lake even in August hovers just over 40 degrees F.  We didn’t want to go in the drink.  At 6’ 4”, my long legs struggled with the rudder pedals, but we would not need to compensate for currents and strong winds on this paddle.  I could do without a rudder.

Tandem kayaks are sometimes jokingly referred to as divorce boats.  Luckily, Charlotte and I had previously paddled tandems at Monterey Bay and at Acadia National Park in Maine.  We were already accustomed to kayaking in sinuous fashion as opposed to a straight course due to lapses in timing and paddling technique.  There would be no bickering.

The distance from our launch point at Grant Village to the West Thumb Geyser Basin is about 2 ½ miles (3 nautical miles allowing for meandering due to un-synchronized paddle strokes).  Early in our paddle, we spotted a 7 foot avian wingspan with an unmistakable white head and tail with a brown body.  A bald eagle soared above the lake’s surface seeking breakfast below. I too could see fish beneath the kayak.

Two primary species of fish are present in Yellowstone Lake-cutthroat and lake trout.  The cutthroat are the native species.  Lake trout were introduced accidently or illegally in the 1980’s or 90’s.  This has created an ecological nightmare.  Lake trout are voracious predators that eat cutthroat, maybe up to 50 a year each, and compete for the same food sources.  This has resulted in a 10 percent decline in the cutthroat population.  The park service is working to cull lake trout numbers.  All lake trout caught by anglers must be kept.  There are no creel limits. Cutthroats are catch-and-release.  At the launch point we noticed a strange looking NPS boat that looked like in belonged in the Great Lakes.  What kind of research vessel is that?  We learned that the park service uses this boat for gill netting, removing a quarter million fish a year.  Unfortunately, the last lake trout will never be caught.   Biologists can only minimize the problem.

During our exploration of Yellowstone, we enjoyed seeing the variety of geothermal activity.  Yellowstone has about 500 geysers, about half of the world’s total, and 10,000 thermal features.  Only Iceland and New Zealand can compete at all.  Jim Bridger, the legendary trapper and mountain man, called it the “place where Hell bubbled up.”  No one believed his descriptions of the area, calling them “Bridger Lies” or fearing too much time at altitude had precipitated dementia. 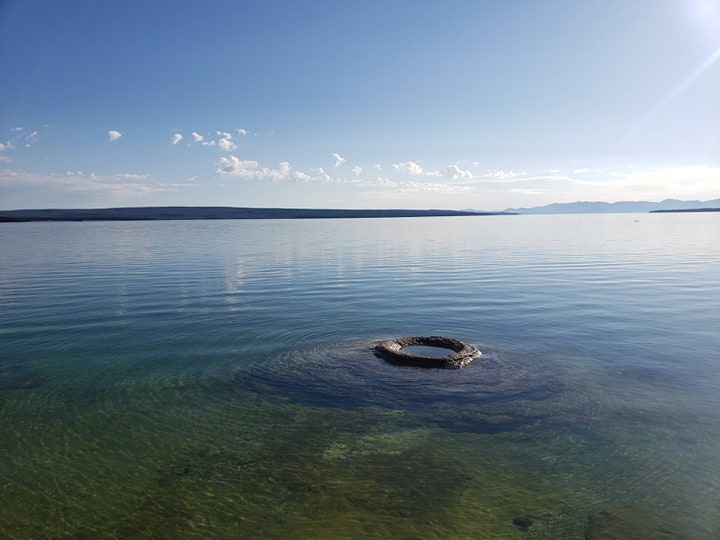 After an hour of paddling, we reached our turn around point.  We had already walked the easy loop trail around the basin earlier in the morning.  From the kayak, we had a different perspective.  West Thumb doesn’t feature plumes of water turbo-rocketing into the air like Old Faithful, and some of the thermal features here are dormant.   Nonetheless, from the water, we viewed steam rising and listened to gurgling scalding-hot water pouring into the lake.

Water emitted from a geyser hits the surface at about 200 degrees F, boiling for this altitude.  Safely back from the lakeshore terracing where the water enters the lake, we submerged our hands into the water.  Charlotte to the port side.  Me to the starboard.  We didn’t tip over. Near the surface the water was warm, almost bathwater.  Dipping our hands deeper the water soon felt like that bone-chilling 40 something degrees F.

One very interesting feature along the geyser basin lakeshore is Fishing Cone.  John Colter was the first person of European descent to see Yellowstone Lake in 1808.  Other explorers followed.  In 1870, after the Washburn expedition, stories surfaced back east of a place in Yellowstone where you could catch a fish, boil it in the hot water of the geyser while still on the hook, and have it ready to eat.  This cooking practice was allowed until 1912.  At one time the Fishing Cone erupted up to 40 feet.  In August 2019, it was mostly submerged and classified a hot spring, not a geyser.

On the return trip, we enjoyed the view of the Absaroka Mountains to the east.  From the water we could also see the tops of peaks from the Red Mountains and possibly the Washburn Range.  Yellowstone Lake is roughly 20 miles long by 14 miles wide.  Its deepest point is about 400 feet, but average depth is 140 feet.  We snacked on twists of huckleberry candy, much preferred to Twizzlers in my opinion.

The predominant tree species on the lakeshore is the lodgepole pine.  We saw stands of lodgepole that were almost assuredly 31 years old.  How did we know this?  The 1988 fire, that consumed 800,000 acres or a third of the park, burned much of the area where we now kayaked.  We learned an interesting fact about the lodgepole pertaining to fire.  It produces two types of cones, serotinous and non-serotinous.  The serotinous cones are closed, but after a fire, the resin encasing the cone melts allowing seed succession for the next generation of trees (The tree with its thin bark burns up, but the protected seeds do not).  Certain trees within the same stand have non-serotinous, or open cones, allowing for reproduction between fires.

As clouds started to build and the skies looked more foreboding, we increased our speed to the take-out.  We were told the lake surface can go from smooth to churning very quickly during a thunderstorm. I didn’t want to need that rudder after all.   Despite the dark clouds, we enjoyed a duo of wildlife sightings, a family of otters, and an elk that decided to relax beachside.

One final nice touch.  We didn’t have to carry and load the 85 lb. Polaris.  Our awesome guides did that for us.  And they provided beer, wine and Manchego cheese.  Charlotte tipped them handsomely.