Our Kimberly Brookshire: from fashionista to ultimate field tester

Kimberly Brookshire atop Clingman’s Dome on the MST. (But is she coming or going?)

Back in 2015, Kimberly Brookshire was working in the fashion industry, though not enthusiastically so. She mentioned her malaise to an acquaintance at a New Year’s Eve party, the acquaintance reciprocated by mentioning something that could take her about as far from fashion as possible: the Mountains-to-Sea Trail, a 1,175-mile trail linking North Carolina’s mountains with its coast. She was intrigued.

So much so that it wasn’t long before she said goodbye to haute couture and hello to the highest peak in the state, 6,643-foot Clingman’s Dome, the western end of the trail. She set off to Jockey’s Ridge (the eastern end of the MST, “and when I got there,” says Kimberly, “I found I wasn’t done hiking. So I hiked back.” In doing so, she became only the third person to yo-yo the trail (hike it one direction, then the other).

Still, her newfound hiking feet were restless. In February 2017, she came into our Charlotte store looking for gear. She mentioned that she’d just yo-yo’d the trail and that she was between jobs.

“You should work here,” came the wise reply. As part of her resume, it didn’t hurt that the packaging for a pair of Farm to Feet hiking socks — the Ocracokes — featured her picture.

Kimberly’s been working here ever since — that is, when she’s not on the trail. She did 1,100 miles on the Pacific Crest Trail in 2018, another 700 miles in 2019, and just returned from hiking the 77-mile Foothills Trail. In the fall, she heads to New Zealand for 1,800 miles of hiking. All of which is to say that when you ask Kimberly’s advice on gear, you’ll get recommendations based on a whole lot of field testing. For instance:

Deuter Aircontact Lite 65+10. “I’m obsessed with the cushioning of this pack,” Kimberly says of the pack’s suspension system. “It’s heaven.” And heaven was what Kimberly needed after testing 10 packs to get to the Aircontact. “It’s especially good if you have a short torso,” she adds. And its storage capacity — 65 liters with another 10 in the brain — means, “you could easily get a week or two of food in there.” At $220, a good price, too, she adds. Learn more and reserve an Aircontact here. 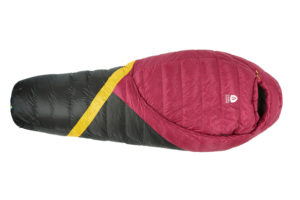 Sierra Designs Cloud 20. This bag has lots of features that Wow! Kimberly. “It doesn’t have a zipper, for one,” says Kimberly, “so cold air can’t get in through the teeth.” (It’s got a wrap-around element from the hips up.) “It has an open footbox, so that if you get warm, you can stick your feet out to cool off. And in the back, it has a sleeve to hold your sleeping pad in place.” And, she adds of the 800FP PFC-Free DriDown bag, “it weighs just 1 pound 13 ounces.” Learn more here. 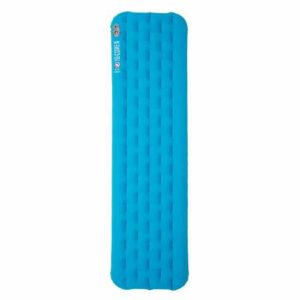 Big Agnes Insulated Q-Core. Side sleeper, are you? Then this is your pad, says Kimberly. Inflated, it’s 3.5 inches thick (with 4.25-inch-thick outer tubes to keep you from rolling off), providing plenty of distance between you and the ground. “I don’t get bruises on my hip bone with this pad,” says Kimberly. “I don’t wake up hurting.” From $129.95 to $249.95, it might be a bit more expensive than other sleep pad options, but as Kimberly notes, “I can’t hike if I can’t sleep.” Learn more and reserve a Big Agnes Insulated Q-Core here. 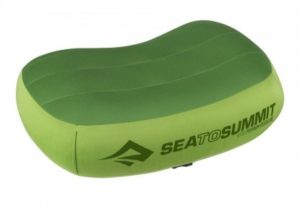 Sea to Summit Aeros. Like most hikers, Kimberly’s trail life began with her head coming to rest each night on a stuff sack full of smelly clothes. Then she graduated to the Aeros. “Three puffs and it’s inflated,” she says of this vital component of her sleep system. “It’s one of my comfort items.” Learn more about the Sea to Summit Aeros and reserve yours here.

Leki Women’s Legacy. Lightweight, strong aluminum shafts; secure locking mechanisms that quickly lock into place; an anti-shock feature that absorbs up to 40 percent of impact — all this and they’re saving your knees in the process. “I value these more than just about any other piece of gear,” says Kimberly. Learn more about the Leki Women’s Legacy and reserve a pair here. 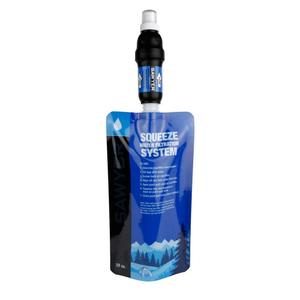 Sawyer Squeeze. “It’s bigger than the Mini, but it’s got a much stronger flow,” she says of the Squeeze’s advantage over it’s little brother. “And sometimes at the end of the day you just don’t want to spend time filtering water.” Learn more abut the Sawyer Squeeze here.

Buff. Every time you ask someone about this multi-tool for the head they come up with new uses for this multitalented piece of fabric. In addition to the usual uses (ear warmer, hat, neck warmer, etc.), Kimberly likes hers because, “I have curly hair and I use it to keep my hair out of my eyes, especially on a windy day. I also use it as a face mask when I run into smelly things. And you can use it to keep sand out of your eyes.” Learn more about the Buff here.