Steve Anderson once described himself as “a runner with a job and a family.”
“I’d run 30 to 60 miles a week, depending upon what I was training for,” says Anderson, who is now 61 and lives in Durham. And he almost always was training for something.
“I ran 20 marathons over 26 years of running,” Steve says. “I ran marathons, including Boston twice and the Marine Corps four times, 10Ks, 5Ks, 10-milers — and trail runs. I loved doing trail runs.” Such as the Shut-In Ridge Trail Run, which starts at the French Broad River in Asheville and climbs nearly 18 miles on its namesake trail gaining 5,000 total feet of elevation on its way to 5,722-foot Mount Pisgah. 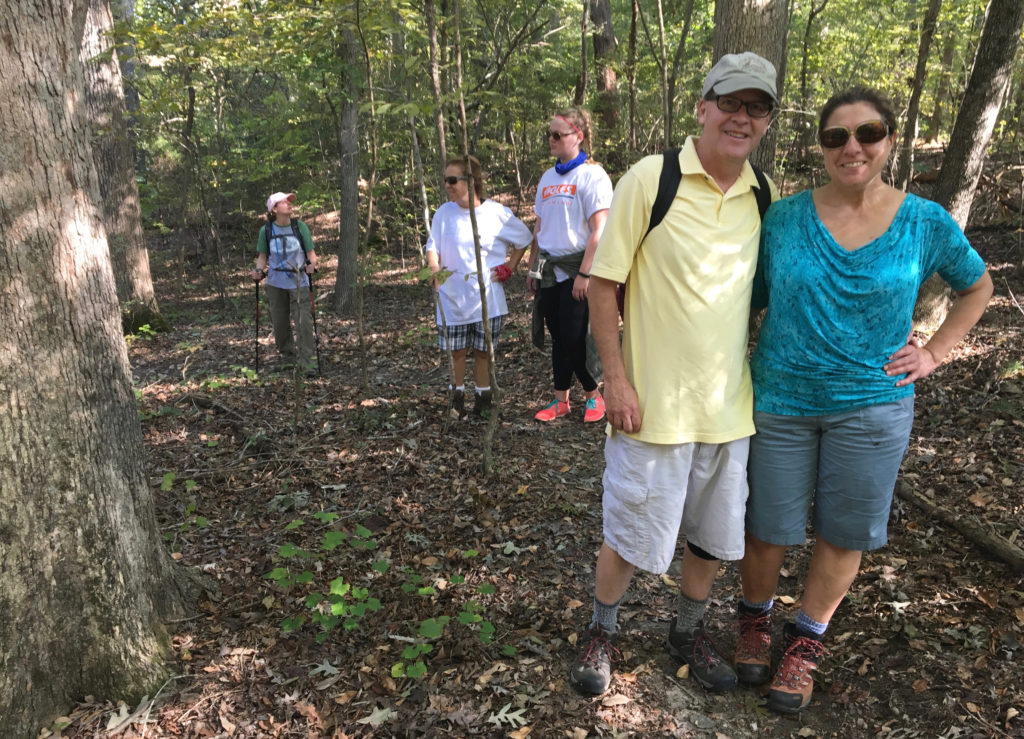 Competitive?
“My running buddies and I had a phrase: ‘Go for the plastic!’ It meant, we’d target races where we thought we had a chance of winning our age category.”
Alas, 26 years of training 30 to 60 miles a week and running more than 150 races can catch up with a body.
“I stopped running about eight years ago,” says Steve. “Knees.”
Fast forward to this past spring, when Anderson was inspired to try a new pursuit.
Hiking.
His inspiration?
A woman.
Maria Lanni was an avid hiker while living in upstate New York. She moved to the Triangle several years ago and resumed her hiking career two summers back, with the GetHiking! Corporate Wellness Program through her employer, Quintiles. She and Steve met in the spring, and she immediately presented her relationship litmus test: Do you like to hike?
Fortunately, he did.
“Actually, I had done some hiking as a kid in Indiana,” Steve said on a hike Sunday on the Mountains-to-Sea Trail along the Haw River. The 4.4-mile hike was one of 60 being held this fall as part of Hike NC!, launched by Blue Cross and Blue Shield of North Carolina in partnership with North Carolina State Parks, North Carolina Recreation and Park Association, GetGoingNC, and Great Outdoor Provision Co. The program’s aim is to get a new breed of hiker on the trail, including transitioning runners such as Steve..
“My family liked the outdoors. We used to drive down from northern Indiana and meet my grandparents, who were driving up from southern Indiana, at a state park.”
Steve says he misses the rush of running — “even when I didn’t feel like running but went anyway, I was glad that I did” — and that nothing will quite replace it But he’s found several things to like about hiking. For one, the childhood memories of hikes with his family. “We’d pack a picnic lunch and spend the day in the park. That comes back when we go for a hike.”
He also likes hiking’s kinder, gentler approach to the body. “It doesn’t hurt my knees,” he says, especially his right knee, which lacks some of the key components required to keep a knee functioning happily.
And he’s put those knees to the test. “In the last three weeks we’ve hiked the trails at Moses Cone, and last week we did Hanging Rock.” He pauses to reconsider a previous thought.
“Sometimes,” he says, “my knee hurts a little on the downhills.”
In the spirit of “One word: plastics,” we share with Steve a word of likewise life-altering advice. Two words, actually.
Hiking poles.

For the next few weeks, we will profile hikers new to the trail. Most of the hikers you’ll read about will be participants in Hike NC! a new statewide hiking program aimed at beginners and sponsored by Blue Cross and Blue Shield of North Carolina, N.C. State Parks, Friends of State Parks, N.C. Recreation & Park Association, Great Outdoor Provision Co. and GetGoingNC. Last week, we saw how new knees transformed Kimberly Dixon of Raleigh. Today: runner-turned hiker Steve Anderson.