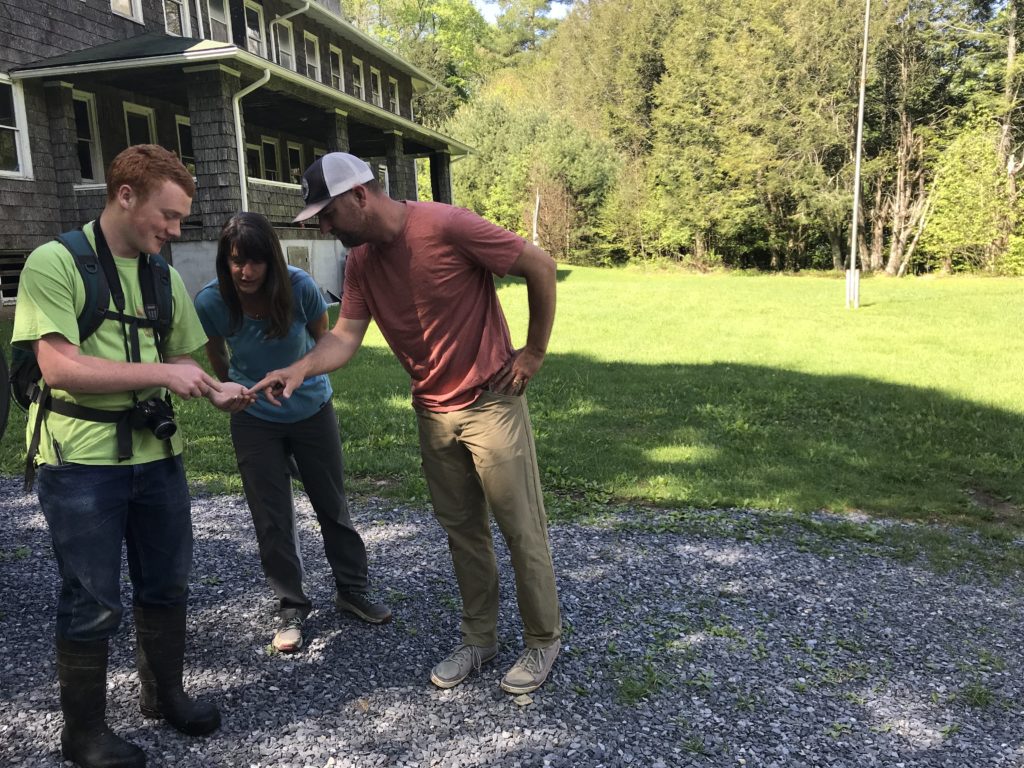 Cade Campbell walks across the yard holding a ringneck snake he discovered a few moments earlier in the lush woods behind what began life in the 1920s as the Konnarock Training School, a Lutheran Missionary School in the mountains of southwest Virginia.  Cade rattles off some facts about the ringneck — that they like salamanders, that a toxin in their saliva immobilizes their prey (though it doesn’t harm humans)  — then starts into a litany of what else he saw on his hour-long saunter: Salomon seal, white trillium, blue cohosh, Japanese barberry, a junco — “It was growling,” Cade says of the bird. “Its beak was snapping.”

“Cade is our resident naturalist,” Aaron Floyd says by way of introduction. Floyd is executive director of the Blue Ridge Discovery Center, which is giving the Konnarock school a second life as its new home. The Center was founded in 2008 with the goal of enlightening locals as well as tourists to the magic of the Mount Rogers / Whitetop Mountain Area.  After nine years of operating mostly in the field and in borrowed space, the Center in 2017 was bequeathed the Konnarock facility, which it is turning into a field lab and learning Center. Konnarock’s location is ideal: from the back door it’s a three-and-a-half-mile hike to the summit of 5,520-foot Whitetop, the second highest peak in Virginia: 5,729-foot Mount Rogers, its neighbor to the east, is the commonwealth’s high point.

Cade is young: he looks mid-20s, tops, but his encyclopedic knowledge suggests he must be closer to 30. I’m guessing graduate studies in a biological or botanical field. “Tell me your background,” I ask. 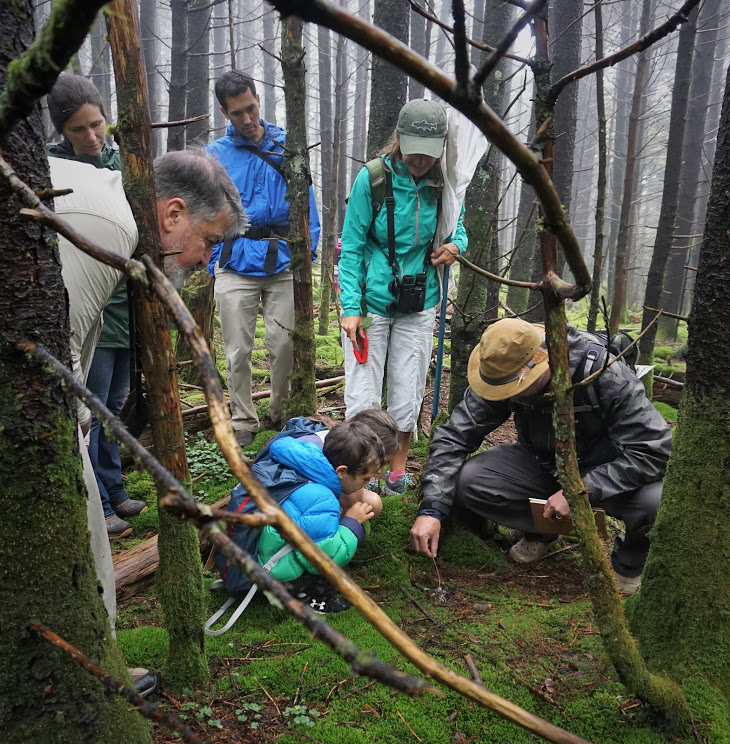 Cade isn’t a product of the Blue Ridge Discovery Center, but he could be a poster child for the Center’s mission.

“Our stated mission,” says Floyd, “is to inspire curiosity, discovery and stewardship throughout the Blue Ridge.”

“We started as a grass roots non-profit to address the disconnect between the community and its natural assets,” says Floyd, who grew up in the nearby Mouth of Wilson and spend a good deal of his youth “exploring the New River watershed and the highlands area.”

It’s not just the local community that the Center hopes to inform. “We also wanted to address the outsiders who come to recreate but don’t really appreciate the value of the place.” (Floyd can relate: “I did not develop a great appreciation for the Blue Ridge until after traveling outside of the region, in particular to the Sonoran Desert.”)

Birding is a popular activity at the Center. Photo: Blue Ridge Discovery Center

For locals who grew up in a place, it’s not unusual for them to appreciate the uniqueness of where they live while also, to some degree, taking it for granted. The urban equivalent might be New Yorkers who have never gone to the top of the Empire State Building, or visited the Statue of Liberty. And for those who come to play, most know it as a place of unusual beauty, though they may not appreciate why that is.

In the case of this particular eco region, the 200,000 acres making up Whitetop and the Mount Rogers National Recreation Area, the story behind this mile-high oasis is especially intriguing. Some 10,000 years ago, at the end of the last ice age, much of the Southern Appalachians, and even into the Piedmont resembled the boreal forests found today in Canada, more than 500 miles to the north. As the glaciers began to retreat and the temperatures warmed, the features of a boreal forest — the firs, the spruce — the features dependent upon cooler weather, began disappearing — except from isolated pockets where the temperatures remained cool. Very small, very isolated pockets exist in the Piedmont, where a steep north-facing exposure prevents direct sunlight and the associated warmer temperatures. That’s why in North Carolina, for instance, you can find communities of rhododendron as far east as Johnston County, or white pines in Wake and Chatham counties. In the Southern Appalachians, you can still find examples of boreal forests, which can survive in temperatures well below zero, but not much above 70.

Thus, given the Mount Rogers area’s unique ecological standing and beauty, inspiring curiosity and discovery isn’t so much a challenge. Promoting stewardship, however, requires an approach that taps something a little deeper.

A few of the 10,000 students who have gone through the Center since it opened in 2008. Photo: Blue Ridge Discovery Center

“We’ve had about 10,000 people go through our programs since we started,” says Floyd. While the Center does a number of nature programs aimed at adults, including two (soon to be three) weekend rallies, the majority of their work focuses on children. Says, Program Director Lisa Benish, “We work with local schools [mainly in a 7-county area], we do field visits, we take them into the woods and into streams.

“Our emphasis is on hands-on learning. We stay away from regurgitating facts and let them explore. Give them a pair of binoculars and a hand lens and let them loose and it’s amazing what they can find on their own.”

“Kids don’t have enough freedom,” adds Floyd. “A lot of parents realize this.”

Kids also don’t get the opportunities in school to find things out on their own.

“We encourage independent thinking, critical thinking,” says Floyd. “We provide the tools and let them decide. It provides something that SOL [Standards of Learning, the Commonwealth of Virginia’s standardized testing program] does not.”

While the Center focuses on the Mount Rogers area, Floyd says their approach and appreciation of place can be applied anywhere.

“Our goal is to instill the idea of stewardship, to develop an appreciation for the place where you are.”

For its first decade, the Center was without a physical presence. In 2017, they were given the Konnarock Training School, which existed from 1924 to 1959 to educate and train girls in the region living in poverty. The Center and its 680 acres of land was sold in 1967 to the U.S. Forest Service and became part of the Mount Rogers National Recreation Area. In 2006, a non-profit formed to restore the Konnarock Retreat House; in 2017, the Konnarock Retreat House board of directors gifted the Center to the Blue Ridge Discovery Center. Floyd says they hope to open the renovated facility in 2021 as a resident education facility (with room for 62 overnight guests), a biological field station and interpretive center.

“One big thing it will do,” says Benish, “is allow us to do three-day programs. We could spend a day exploring streams, the next day the woods. We could do a night program.” And the thee-day immersion programs, she adds, would have a more profound impact than a three-hour program.

The Center is hoping to add a Winter Naturalist Rally in 2020. Photo: Blue Ridge Discovery Center

How much impact the Center has had in its 11 years is difficult to say, but Floyd says some of their earliest students are now returning as camp counselors, and that several participants have gone on to study in biology- and ecology-related fields at Virginia Tech and other regional schools.

Cade Campbell may not have been one of those early students, but he’s the epitome of the type of passionate observer and critical thinker that the Center hopes to produce.

Holding a cherry millipede he flips it over. “Smell that? It’s kind of an anise smell.” He finds two different types of dusky salamanders and says, “There are more salamanders in these mountains, by sheer biomass, than all the mammals combined.”

His knowledge of the outdoors began “when I was about three and exploring the woods” near his east Tennessee home. “I’ve been exploring and learning ever since.”

He’s looking forward to his summer helping with camps at the Center. and encouraging budding young naturalists. And after that?

As a non-profit, the Blue Ridge Discovery Center relies on a variety of sources to carry out it’s mission. It receives grants, it relies on memberships (which start at $25 a year), it’s aided by volunteers, and it receives donations — in a variety of ways. An example:

A majority of the students who participate in the Center’s programs, especially the field programs, are kids. If you’ve ever been on a long mountain hike or backpack trip and come across a pack of scouts or a youth group, you know they aren’t always well prepared.

“One of the biggest issues we have are ill-equipped students,” says Program Director Lisa Benish. One of the biggest problems: shoes that aren’t made for the rugged — and wet — outdoors. “One of the best gifts we got was $1,300 in Astral shoes,” says Benish of a gift that Great Outdoor Provision Co. participated in. (Great Outdoor and Patagonia also provide outdoor clothes for staff.) Astral’s are half hiking shoe, half walking shoe, and are especially well-suited for the Center’s field outings.

“Hopefully,” says Benish, “they’ll keep us from having to spend so much time on foot care.”

Interested in helping the Blue Ridge Discovery Center? You can do so by becoming a member, by becoming a volunteer, or by making a donation.