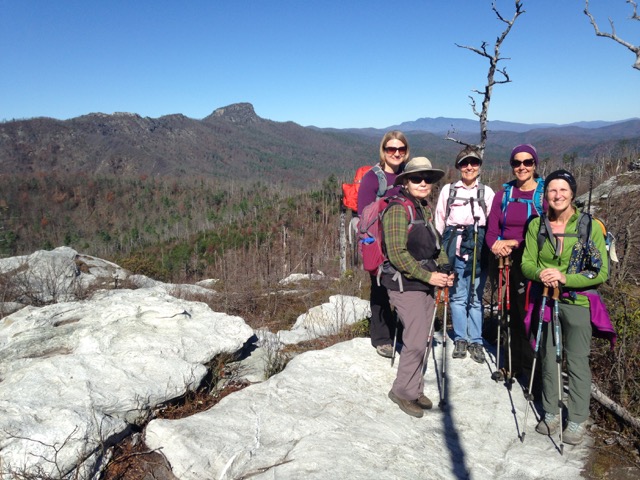 It wasn’t a particularly big deal when this particular adventure Meetup launched in 2007. In just 5 years, Meetup had become the way for like-minded folks to organize, be it for bar crawls or day hikes. In this case, the “like-minded” had two things in common: a love of adventure and the X chromosome.

“It was meant to provide an outlet for women outdoor activities, without pressure or competition,” says Leslie Pardue, who joined the Lady Trailblazers of the Triangle in 2008 and has since become its lead organizer. “It’s not about how fast you can you go; we like to go at a slower pace and talk. We’re more laid back.”

The Lady Trailblazers started in the Triangle, but soon their reach was statewide and the “Triangle” dropped from its name. Its number of members has swelled to more than 1,500, and Pardue has since launched a similar, mountain-based women’s group, Asheville Women Outdoors.

Pre-Meetup: Adventures of a varied sort

The Trailblazers, and similar women-only adventure groups to follow, offered something that had been missing from the adventure scene for many women.

“The quality of the experience is different with women,” says Pardue. “This allows them to open up be themselves.”

Prior to the advent of Meetup and the proliferation of Meetup-based adventure groups, outdoor adventure clubs often had a reputation as outdoors singles clubs, where the male of the species was sometimes inclined to be more strutting peacock than committed explorer. That could make it difficult for a woman who didn’t want her guard to constantly be up on a hike or camping trip. That factor was eliminated by early Meetups such as the Trailblazers.

“Our members don’t worry about getting hit on,” says Pardue. “That’s not what they want. Our group eliminates that factor.”

It’s a sentiment that’s gained traction in the past few years. Meetup reports it has 38 women-only Meetups (not all adventure oriented) with 13,222 members in seven countries. Other women-only adventure groups have sprung up as well. In 2012, Niki Koubourlis founded the Bold Betties aimed at women with, “A hunger for adventure. For exploration. For pushing boundaries and learning something new.” Today, the Bold Betties, which offers everything from day hikes to axe-throwing get-togethers to weeklong trips abroad, has 40,000 members in 37 chapters nationwide. In North Carolina, the Betties chapter in Charlotte has 450 members the Triad chapter 525.

And the movement promises grow again soon. She Went Wild, an “active community of women who love fresh air and adventure,” was launched in the United Kingdom in 2016. The organization holds expos and workshops, and currently has more than 40,000 members in Europe.

The group is planning to expand into the U.S. — eventually.

“We love the US, and we hope to get there someday,” says Kim with She Went Wild. “Our analytics are showing that we do have an audience over there, but we’re not quite ready to expand our workshops that globally yet!”

Those workshops include everything from one-day clinics on navigation and rock climbing to backpacking trips.

One aspect of what She Went Wild does will reach the U.S. — and the Triangle — this fall when the “Women’s Adventure Film Tour” comes to Raleigh. She Went Wild is a sponsor of the film’s European tour. The Tour debuted in Australia in 2017, and features short films featuring intrepid female explorers.

Instilling the confidence to explore

A unifying goal of the women-only groups is to instill confidence in women to explore the outdoors, a level of confidence that males may have been more likely to develop in their youth, but not most females.

“A lot of these things they may not have done or may not have done in a very long time,” says the Lady Trailblazer’s Pardue of her membership. “We see increased confidence by participating in these events. Their confidence level goes up, it encourages them to be more independent.”

Learn it, she stresses, then do it.

“We don’t do a lot of hand-holding. We won’t do things for them that they should be doing themselves.”

The Trailblazers offer a range of activities geared toward beginners and more experienced explorers alike. Currently on their Meetup site there’s a yoga class and a midweek evening hike, as well as weekend camping trips at Grayson Highlands State Park in Virginia, Deep Creek in the Smokies and at Hanging Rock State Park.

Women only: a more authentic approach

“Women Exploring Nature in the Triangle……and beyond,” is another women-only Meetup in the Triangle. With 583 members, it, too, offers a range of activities, participation in which is up to the organizer: “ … well-behaved kids, dogs and men may be brought to events where the organizer of an event specifies they are welcome to attend. (You are responsible for your guests at all times and dogs should be leashed, under your control and people friendly. If you leash the others, we do not recommend it, but that is your choice.)”

Pardue says about 20 percent of the Lady Trailblazers’ events are also open to all.

In fact, the movement is less about excluding men, more about a more pure approach to embracing outdoor adventure.

On the “Our Story” page of its web site, the Bold Betties write: “We firmly believe that being outdoorsy doesn’t mean that you have to be ripped and hanging from a cliff, it doesn’t mean you have to wear certain things or look a certain way, be a specific size or be in elite outdoor groups. … We love the authenticity of nature and we respect her by giving it back. That means we are sometimes frightened, nervous, awestruck, overwhelmed, brought to laughter, and brought to tears by her beauty and the challenges it brings to us. And our favorite way to experience that is with other wickedly adventurous women.”

To learn more about the groups mentioned today, click on the appropriate link:

Dates for the “Women’s Adventure Film Tour” fall appearance in the Triangle have not been set. Learn more about the tour here. Great Outdoor Provision Co. is sponsoring the local showing; keep an eye on our web site and Facebook page for details.