This time, Ward remembered to pull his rod.

It was early spring of 1989. “I bought a couple of carabiners and some static rope (the color of pink that could’ve only been produced in the ‘80s) to be used as a prusik material as I went to become a raft guide on the Chattooga River. It was my first purchase from a Great Outdoor Provision Company,” says Swan, today a key member of the paddle sports department at our Winston-Salem store. “I still have one of those carabiners and the pink rope on a mesh bag I use for my snorkel equipment. Despite how many places it’s been, the pink is still shockingly bright.”

Swann is a home-grown product of the Camel City, but he’s been around. His steamer trunk includes stickers from the Bahamas, Canada, France, England, Germany, Switzerland, Austria, Spain, Morocco, Egypt, Jordan, Doha, Costa Rica, Panama, Brazil and South Africa. In some of those spots he’s earned a living as a paddle guide, leading on Canada’s Saguenay River, the Bastro River in New Jersey, Virginia’s James River and the Roanoke River here in North Carolina. He’s also lead trips up and down the East Coast, from Maine and Martha’s Vineyard, to Charleston, S.C., and points south.

Early on, he was a climber, “but now I have a completely different arrangement with gravity.” He used to hike, “but then realized that by paddling, the pack would carry me instead of me carrying the pack.”

His biggest secret? “Despite being able to talk a pretty good game about a fishing in a kayak, when I’m on the water I forget to pick up the rod because there is always something to see around the next bend.”

But the paddling has stuck. During his six years as a professional sea kayak guide, “two things that really told me that I was a professional guide: tying boats to the top of a van as snow froze the ropes to go teach a class in a pool, and changing into a dry suit in the men’s room at a convention center so I could do stupid human tricks in a pool that even polar bears would say was a bit chilly.”

We managed to catch up with Ward to ask a few key questions about the life of a climber-turned-hiker-turned-paddle-instructor-and-stellar-retailer.

Q. What, or perhaps who,  first introduced you to the outdoor lifestyle? And how did that love affair blossom?

I remember the first night I slept out. My cousin and I made tents out of bed sheets. I was aware that by being outside we were more free than usual. If we wanted to get up and walk around, we could. From then on being outside is synonymous with liberation and the consequences that come with it. That carried on through Boy Scouts. It wasn’t until I started working at Provision Company the first spell in 1992 that I realized that making do with crappy gear or excessive gear was burdensome. Since then I’ve felt that the best gear you take with you is so seamless, so liberating that you forget about it; in effect, it disappears. It doesn’t have to be expensive, it has to be right. The third step in my Outdoor journey came when I started working for a kayaking guide/instructor business. Just driving to Maine was a revelation. When I then drove into Canada the revelation was repeated. This world is really small. I felt like a tumbleweed; firmly rooted in the Carolinas but became loose to seek out the horizon.”

Q. Where in the Triad do you like to escape for a quick paddle?

Belews Lake is a nice place to work out. Getting lost in a freestyle canoe workout means an ever-decreasing sphere of attention. Once you are in a cove cutting and accelerating the world disappears.

Q. How about a quick local hike?

Q. What about the Triad area makes the GOPC shop in Winston-Salem unique?

The Winston-Salem Provision Company is a store made up of two spaces. A year ago the store front was unified to make it one store and we have been receiving compliments from our customers all year long. The floor between the two sides, however, is a bit harder to unify. There’s a little rise where the two spaces come together. In some places it’s really noticeable. By now I have forgotten that it’s even there — until recently. While at the register I turn around to see a kid lying on the floor and rolling down the rise in the floor as if it was the largest hill in the neighborhood.

Q. How long have you been with GOPC?

I started working at the Provision Company the first spell in 1992. 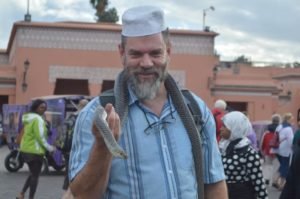 With a new friend, in Morroco

Q. Give us an example of why you like working with customers.

Over the winter a customer came into the shop who, back in the winter, had bought two fishing kayaks exactly the same. I tried to encourage him into different colors — variety is the spice of life. All of the encouragement I could muster was not to work. He wanted what he wanted.

So when he came back in recently to talk about anchor trolley systems on his kayak I was glad to see him again. We talked about the trailers that he builds. We talked about how another customer made a trailer for his boat and painted the trailer to match the boat, of the same color boat that this customer bought two of, too. ‘People really like that yellow-jacket color,’ I joked. He then looked a little sheepish and told me that he and his son have a tradition of getting matching boats. He then fixed his gaze at me and gently explained, “My son died in Afghanistan. While he won’t be using the boat, well, I guess I have it for someone to come with me.”

Q. What’s the oddest thing you’ve seen in the store?

I think I saw a ghost once. First, an older gentleman came in and asked for a “paddling jacket” for his son, who paddles with his son on the French Broad. He described his son’s height and weight as I thought about the fact I’d never heard a PFD called a “paddling jacket.” After showing him a great choice he said that he’d send his son in to see it.

An hour later a guy comes in and says that he paddles the French Broad with his son and he loosely fits the description from the earlier customer. So I ask, “Oh! Did your dad send you in? I just had an guy that was about 85ish tell me that he would send his son in.” “No,” he replied, “My Dad passed a few years back.” I apologized and figured that it was all an interesting coincidence. Then, after introducing him to some pretty cool boats he said something about needing a “paddling jacket.” It was the kind of term a son would learn from his dad. The hairs on my neck stood up.

Favorite sea kayak: Dagger Meridian
Favorite whitewater kayak: Jackson Zen
Favorite canoe: Whatever I get in at the moment

Cedar Island out to Core Banks, then to Ocracoke and back on a ferry to Cedar Island. It has more wildlife in and above the water than anywhere else but it can be very temperamental.