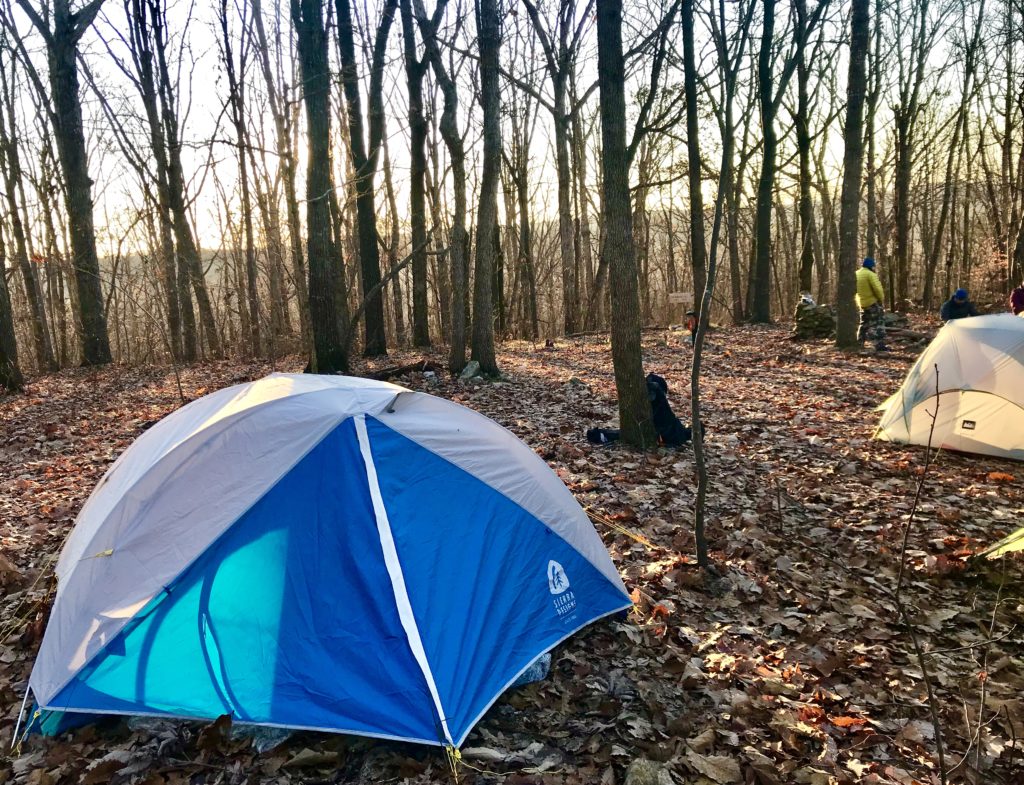 When you review equipment, you typically don’t have enough time to make a thorough evaluation. You test it for maybe a month, you gather your initial impressions, you provide your assessment. But how does the gear do in the long run?

That’s the question we’re here to answer today. Below are six pieces of gear I’ve reviewed that left a favorable first impression. How have they held up? Let’s see …

In early summer, we came into possession of the Sierra Design Clearwing 2 tent (the “2” being for 2 people; it also comes in a 1- and 3-person). We were initially smitten by the price point: $229.95 for a backpacking tent from a well-regarded gear company is pretty decent. True, at 4 pounds 10 ounces it’s a little heavy, but it’s solid as a rock, made from a mix of sturdy 68D 190T poly taffeta and 15D nylon mesh. Just the thing for the backpacker who’s not obsessed with weight and wants to make sure he/she is insulated from the elements. On my first outing with the tent, in early September on the Mountains-to-Sea Trail, the weather was too ideal to truly test the tent. Not the case this past weekend, w

hen I had to set up in a steady rain that  lasted — with periods of deluge — throughout the night. As soon as I crawled into my bag I knew I was golden: the rain beating on my rainfly lulled me into a deep sleep, thanks in part to the confidence that I would wake up dry (which I did). I also knew that if my fellow backpackers’ tents failed them, I could easily accommodate a guest thanks to the hoop-pole design that makes for truly vertical walls and lots of space. 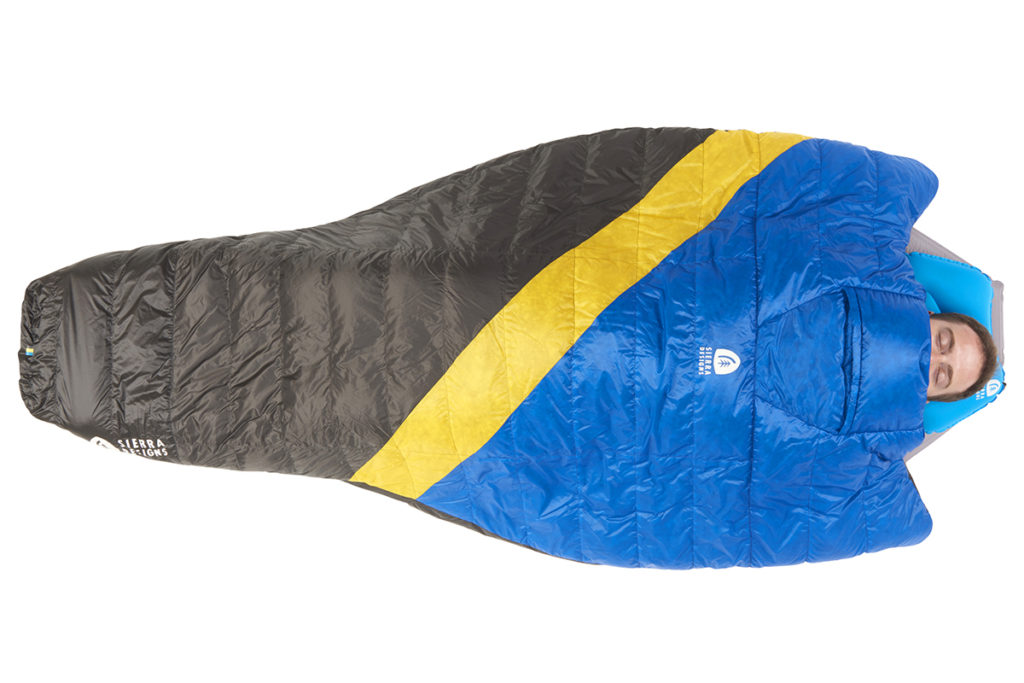 I was a quilt skeptic going into the Sierra Designs Nitro Quilt 800. You actually sleep on top of the sleeping pad? With nothing underneath you? I’d heard the arguments that the underside of a sleeping bag was wasted because the down/fill became compressed, it’s insulation factor diminished. But still, isn’t compressed fill better than none? Is the only reason backpackers like a quilt because it’s lighter? The first two times I used the quilt I was smitten. I’m a toss-and-turner, and instead of getting all pretzeled-up within the confines of a mummy bag, the quilt stayed put while I thrashed about. I didn’t get a chance to test my warmth theory, though, until this past weekend. On my previous two Nitro outings the temperature hadn’t gone below the low 50s; on this trip, the forecast first indicated nights around 40, later down to 34. I’ll admit that I did use a silk bag liner, but even with the overnight low dropping to 31 early Sunday, I was toasty. And the opening for your face that I once puzzled over — the slotted hood that lets you breath while embracing your noggin — was genius. On a winter trip when you’re spending 12 hours in your tent, it’s essential to stay warm, and the Nitro Quilt didn’t disappoint.

Still pleased? I regard the Nitro with even warmer affection than I did when we first camped. 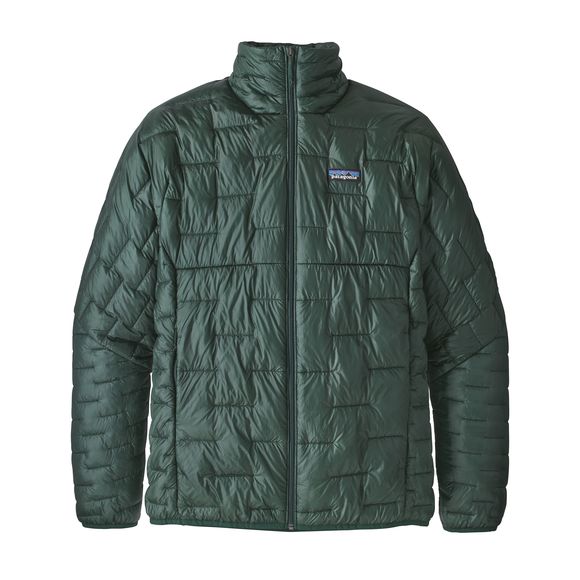 When I first tried the Micro Puff in May, I wondered: Is there such a thing as a four-season parka in the Southeast? Over the summer, I was surprised by how the Micro Puff was able to ward off an evening chill around camp in the mountains without overheating. Good zipper management was key, true. But the jacket’s feather weight — 8.3 ounces — felt like you were wearing nothing. As the weather cooled, I’ve been able to test my four-season theory. Saturday night at camp, with the temperature rapidly dropping into the mid 30s, I was feeling none of it wearing my Micro Puff over only a t-shirt and mid-weight base layer. The true test camp when I abandoned the campfire and retired to my tent. Inside, I attended to some housekeeping, then settled in to catch up on Rudi Matt’s battle to avenge his father’s defeat on The Citadel (“Banner in the Sky,” by James Ramsey Ullman). I might as well have been at home in my cardigan seated by a roaring fire, my pipe stoked with Borkum Riff, a snifter of brandy … OK, maybe that’s a slight exaggeration. But reading in my tent at day’s end is a key part of backpacking for me, and I have trouble focusing on the words when I’m shivering uncontrollably. The only shiver Saturday night? When young Rudi got caught on a ledge during a freak winter thunderstorm. 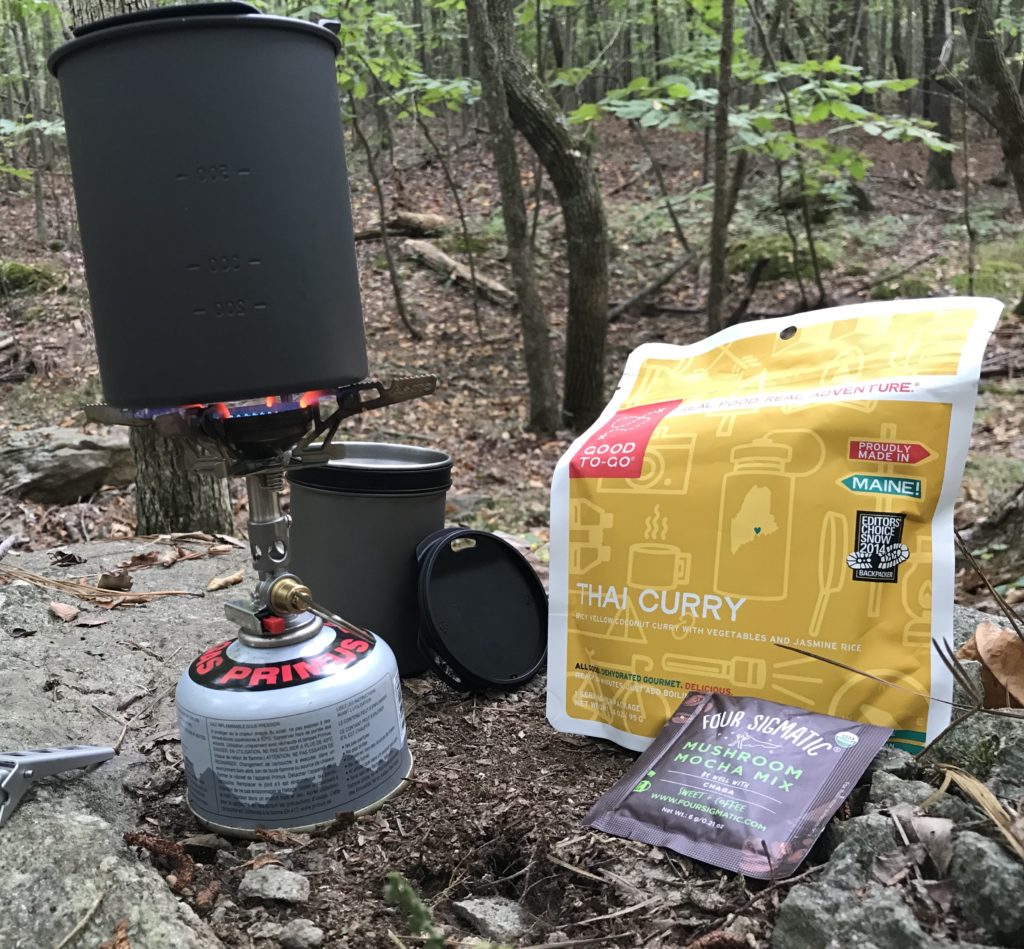 I take a penurious approach when it comes to gear: if it ain’t broke, don’t replace it. For years, I’ve been happy with my reliable MSR PocketRocket stove. It’s lightweight, it’s dependable, it boils quickly. But it’s also loud (people wonder why there’s a jetport in the woods when I fire it up) and a bit susceptible to wind. When the opportunity to try the WindMaster came up, I thought, Maybe there’s still time to save my hearing. So I gave it a try. The WindMaster impressed from the start and continues to after eight trips. It’s quiet and it’s efficient; in fact, the one possible knock is that it may be too efficient. All those 10- to 20-percent full gas canisters you have laying around, the ones that won’t sustain a full weekend but you can’t yet recycle because they still contain gas? I’ve slowly been whittling away at my stash with the WindMaster, to the point where this weekend I didn’t even bother to see if there was any rattle left, I just threw the canister into my mess kit. Well, there was no rattle, it turned out, yet I still got dinner, breakfast and three cups of coffee out of it. I did not, sadly, get my last breakfast coffee. User error.

Still pleased? Yes. And did I mention that the piezoelectric igniter still fires? Don’t think I’ve had one of those last more than two or three trips before. 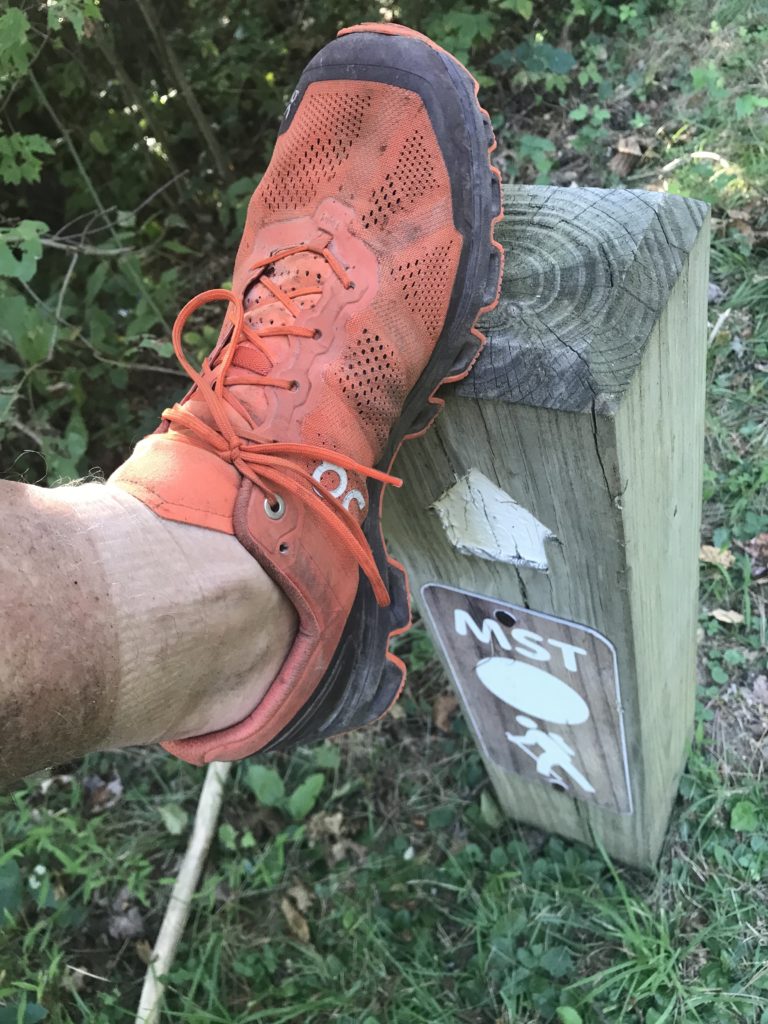 Before I wrote my review of the On Cloudventure, I logged more than 110 miles in them. From a performance standpoint, I had a good feel: for running, for hiking, for backpacking, these shoes were great! They were comfortable, their unusually cushioning lugs offered great protection, and the skinny laces never came untied. And nary a blister under some pretty trying conditions. The only knock: the spacing of the lugs tended to trap 1/2-inch to 3/4-inch gravel. Performance-wise the shoe was great. The only question: How would they hold up? Trail shoes tend to have a short life: if I can get 400 miles out of a pair before they start to flatten and rip out, I’m happy. The Cloudventures have shown a little more wear a little earlier on than I might have expected: Nearing the 300-mile mark, the heel upper is frayed and there are signs of ripping near the ball of both feet. Still, they offer sufficient cushion, which is the most important factor. I likely won’t backpack in them anymore, but they’re still good for a hike on the Mountains-to-Sea Trail or a run around Occoneechee Mountain.

Still pleased? To the point that, yet, I would get another pair. 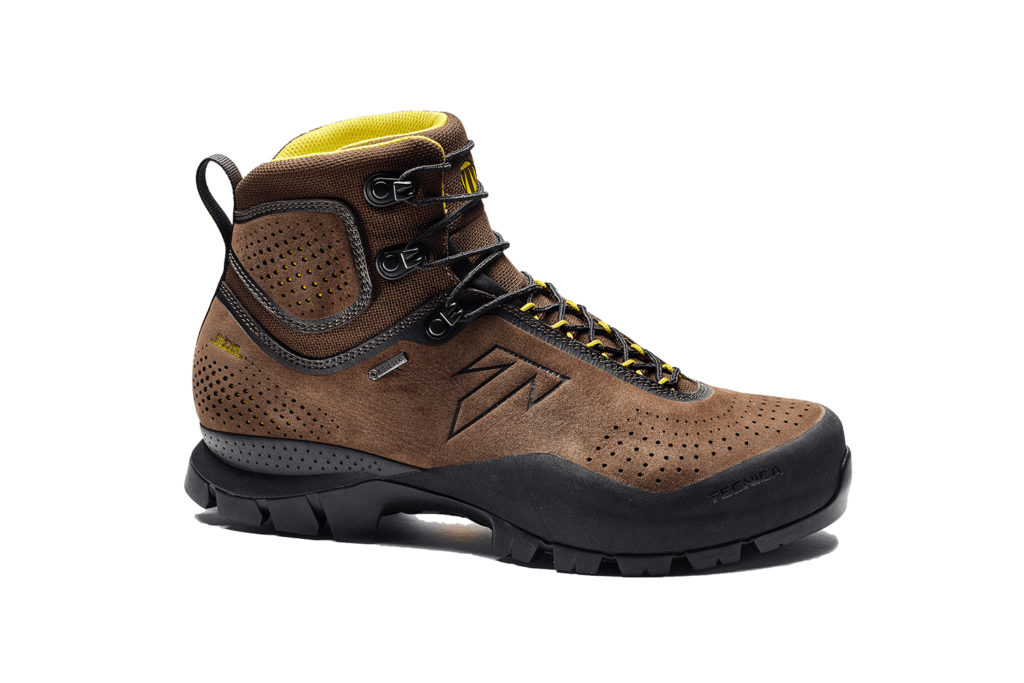 I actually reviewed these more than a year ago. But this past weekend I finally got a chance to truly test how waterproof they are. Now, I generally steer clear of Gore-Tex shoes; water comes in over the top and gets into the shoe and it’s harder to evict than a brother-in-law staying for “just a day or two.” Boots, with a higher ankle, have a greater tolerance since the lip is two or three inches higher. The tolerance is even greater with the Forge GTX because the collar snuggles up around the ankle — not a restrictive, cinching, “I-can’t-breath” snuggle; rather, a seal that you can barely feel. So when we hiked in Friday night in a steady rain that had already swollen creeks and flooded the trail with an inch of precipitation, my fellow backpackers were dancing this way and that to avoid standing water. I was, too, initially. But the more I hiked the more emboldened I became. Before long I was simply plowing through puddles and pools six inches deep — with no repercussions. I should note, too, that after more than a year of use, the custom fit still coddles my feet with comfort even after a 10-, 12-, 14-mile day.

Still pleased? Yes. Of all the gear I have, I’m betting this is the piece I never replace.