Trail shoes you’ll love no matter what your speed

There was a time not long ago when hiking shoes were hiking shoes (boots, actually) and running shoes were running shoes, and never the twain should meet. Then, along about the time backpackers decided they didn’t need to carry 60 pounds on a backcountry escape, the footwear landscape began to change. Those sturdy, stout hiking boots that played a key roll in making those heavy loads possible to bear were no longer a requirement. In fact, if you had a base weight of, say, 10 pounds — not uncommon among today’s thru-hikers, you could get by with a less substantial shoe. A much less substantial shoe.

Today, even backpackers not out to set an FKT (fastest known time) are discovering they can get by with a shoe quite unlike their grandfather’s (or even father’s!). And, we should add, a shoe much more comfortable as well. (Remember the days of the classic clunky hiking boot, when the only thing you could think of during the last mile of a day hike was how quickly you could get them off? Doesn’t happen with today’s trail-runner/hikers.)

Today, we highlight three of our favorites.

One of the things those five-pound leather hiking boots assured you of was stability. All that padding, the chunky rubber soles, the metal last in the footbed — can a shoe that weighs just 380 grams like the Salomon XA Pro 3D come close?

It can and it does. And it’s not by using mirrors. Rather, technology. The XA’s 3D Advanced Chassis — a firm layer between the outsole and the midsole — keeps your foot in check and prevents it from rolling around. That’s especially reassuring on the rocky, rooty trails of the Southeast.

Assuring, too, is the XA Pro 3D’s grip: no deep lugs, just lugs deep enough and sturdy enough to keep you from slipping — on wet tree roots, say, or a trail covered with a coat of freshly fallen and slippery leafs.

Appealing as well is the Quicklace® lacing system. These systems, which eschew traditional laces that tie in favor of a sturdy, yet thin, cord that cinches tight with a plastic lock, make for quick adjustments on the trail. They also don’t come untied, thus avoiding the awkward “hey-your-shoe’s-untied/made-you-look scenario.”

A good option, too, if you like your shoes on the wide side.

If you’re a fan of exploring the rocky terrain of the Southern Appalachians — and even in the Piedmont — you’ll like this shoe. It’s construction includes a rock guard outsole with Impact Brake System® designed to handle the unforgiving terrain of, say, Linville Gorge, the Shining Rock region and other areas of the Pisgah National Forest. It also has a midsole built to absorb the shock of the trail, especially key for trail runners, but important to hikers who like to put in long hours on challenging terrain.

it’s a light shoe at 268 grams and it has a wide toe box, which grants your dogs a little freedom on long day hikes. (Dunno about yours, but ours get a little cranky when they don’t have the opportunity to stretch a bit.)

This shoe will also appeal to those of you who believe you should get more than a couple hundred miles out of a more costly lightweight trainer/hiker. Reports of runners and hikers logging 500 miles or more in the Lycan are not unusual.

Even distance-running vlogger/podcaster The Ginger Runner, a k a Ethan Newberry, who’s had an on-again off-again relationship with La Sportiva is a fan of the Lycan, calling it “snappy, quick, responsive.” 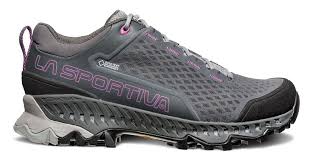 Are you a hiker or backpacker still leery of making the switch to more of a trail running shoe? Then perhaps you’d be interested in transitioning with the La Sportiva Spire GTX. La Sportiva even calls this a boot, though its low profile might argue otherwise in the minds of more traditional hikers.

Hikers intrigued by the lightweight trend will be assured when they flip the shoe over to find a traditional Vibram® sole. Nothing says hiking shoe — sorry, “boot” — like the prospect of leaving a Vibram® print. Also reassuring when you pick up the shoe up is its weight: obviously lighter than a traditional boot, but at 440 grams a bit heftier than most trail runners. Still, light enough that you’ll notice a little boost in your step.

More traditional hikers will also be reassured by the boot’s waterproofness. As the GTX implies, this is a Gore-Tex® shoe that will keep feet nice and dry on dewey mornings and in light rain.

We see the Spire GTX as being especially attractive to the multitude of backpackers interested in dropping weight but not at the expense of comfort. If your goal is to get your base weight below 10 pounds, by sleeping under a tarp and eating cold-soaked mashed potatoes, then you’re probably content with the lightest trail shoe out there, comfort and support be danged. But if you’d be happy with a 20- to 25-pound pack, then this is the lighter, faster, comfortable shoe for you.