Susan Levy, a charter member of GetHiking! Triangle and a graduate of last fall’s GetBackpacking! program, is thru-hiking the Applalachian Trail. She set off on March 30 from Springer Mountain, Ga., and is about a third of the way through her hike. Today and tomorrow, we catch up with Susan — known on the trail as “Kansas” — on how her hike is going so far. 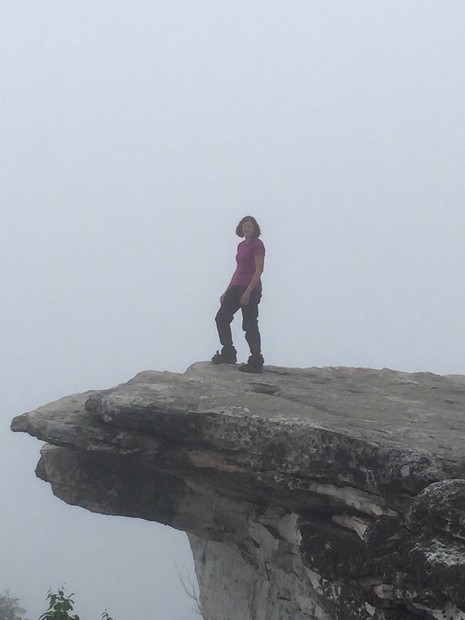 Susan Levy couldn’t understand why, 700 miles into her thru-hike of the Appalachian Trail, it was only now starting to get hard.
Not that the first 700 miles — from Springer Mountain, Ga., north to Daleville, Va. — had been easy. As Mudder ,one of her two newly acquired hiking buddies, frequently observed, “The AT, man — it ain’t no joke.”
But wasn’t it supposed to get easier? Weren’t you supposed to settle into a routine, get into a rhythm? Hike 15 miles with a 35-pound pack like you were walking down the driveway to fetch the morning paper?
Besides, this “hard” was different. Different from staring down your third long climb of the day and thinking, “How on Earth …?” Different from suddenly noticing that you’re damp, or soggy, or whatever, and have been for so long you can’t recall being dry. Different from thinking that if you can just hitch a ride into town for one Diet Coke, everything will be OK.
Four days of slogging along and she couldn’t figure out what was different. Then, on the fifth day, when she started throwing up and couldn’t stop, she began to get a better handle on what was different.
And wrong.

Compass? Who needs a compass?

Susan’s story as an AT thru-hiker is typical in that there’s little typical about it. Two years ago, her casual walks were confined to pavement. Then she signed up for the Ultimate Hike, vowing to raise $2,500 to fight children’s cancer by hiking 28.3 miles in one day. Nine months ago, she’d never slept in a tent; rather than ease into it by car camping, she signed up for the five-week GetBackpacking! program, which concludes with two nights in the wild. About the same time, she started thinking about the AT. For the remainder of 2014, she hiked in a full pack. Shortly after the first of the year, she committed, and on March 30 she started hiking north from Springer Mountain.
Susan isn’t one to wax about the why: Why am I hiking the AT? 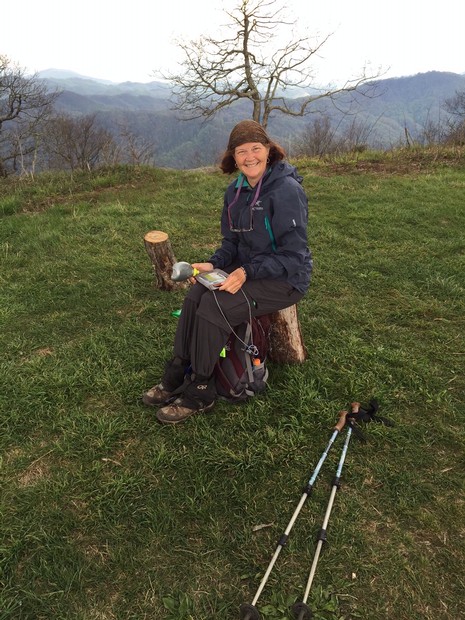 In fact, that’s one thing she’s noticed about her fellow thru-hikers during her first two-and-a-half months: no one she’s met is searching for meaningful answers to life’s persistent questions.
“The younger hikers are generally just out of school and don’t know what to do next, and the older hikers have always wanted to do it.”
Her favorite answer to the question of Why? came from Bee Man: “He said, ‘I just want to have something to crow about.’”
Which isn’t to say there hasn’t been a revelation or two along the way.
At the traditional thru-hiker shakedown at Neels Gap, 30.6 miles into the hike, Winton Porter and his Mountain Crossings crew go through your pack and tell you what you can and can’t — or should and shouldn’t — keep.

“Mine took two hours,” she says of her shakedown. Among the four pounds jettisoned from her pack: a 5’ x 7’ tarp, a length of rope (“A Boy Scout leader I talked with insisted it was vital”), and several of the lighters and boxes of matches scattered throughout her pack.
“I was afraid I wouldn’t be able to start a fire.”
Perhaps her most surprising piece of excess equipment?
“My compass. They said the trail was so well marked I wouldn’t need it.”

Nutrition, fueling her 13-mile days, has been a challenge. In her first two months she lost 12 pounds, unable to sustain her 5,000-calorie-a-day hiking habit on a diet mainly of tuna, pickles, jerky and Slim Jims. With no interest in cooking at the end of a long day, she wound up sending her stove home.
She’s been impressed by the civility of her fellow hikers — only once has she heard voices raised (over whether photography is art). And while the trail has its share of partying thru-hikers, curfew is almost always observed.

The thru-hikers themselves have been entertaining. Demographically, the hikers are either young — in their 20s — or older, of retirement age. “There’s a lot of tattoos, a lot of guys wearing skirts, or kilts, I guess they call them. And there are a lot of Germans.” (Apparently, there was a recent German documentary on the AT that drew a lot of interest.) 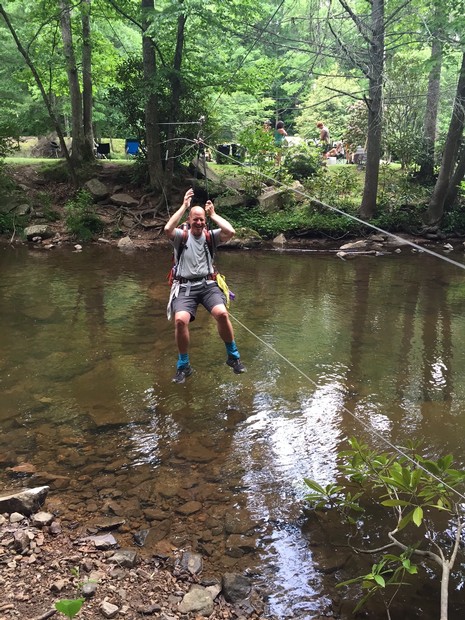 And, of course, there’s been plenty of trail magic.
Sometimes, it’s as simple as bottled water left along the trail. Or as elaborate as the annual spread at Brown Gap south of Hot Springs, where for the past 16 years a group of former thru-hikers convene to make breakfast, lunch and dinner for thru-hikers over a four-day period. Adult beverages, too.
“It was the best moonshine I’d ever had,” says Susan. “Not that I’ve had a lot of moonshine.”
Which she can’t say about Diet Coke, her one obsession and the thing she misses most. So desperate was she for her fix in Virginia that at one road crossing she sat in the road — “I sat in the road” — for nearly an hour to hitch a ride to where, her intelligence told her, she could find a cold one at Joe’s Tree Farm. When a car finally came along, the driver informed her Joe’s was only open around Christmas.
“I miss Diet Coke really bad.”

The Joe’s disappointment was on Monday, June 1. Her online trail journal entry for the day was titled, “Tired, down,” and makes mention of “still feeling blue.” Tuesday, she reported rain and low energy. She expressed elation at passing the 700-mile mark on Wednesday, and ate well in town, where she slept in a hostel and looked forward to slackpacking (hiking sans full pack, which would be shuttled to her next destination) on Thursday. Minus the pack, she, Mudder and Advil hiked 25.7 miles on Thursday, her longest day on the trail thus far.
Then, on Friday, the wheels started to come off. Her short entry for the day: “Low energy. Feeling down. Decided to go back to Daleville [Virginia]. Went to hiker feed in Troutville. Felt sick at night.”
So sick that she was up most of the night vomiting. Finally, Advil called a taxi and took Susan to a hospital in Roanoke. Susan spent most of Saturday — National Trails Day — sleeping, then made the decision to take a break from the hike. She and husband Mike, who’d driven up the day before, returned to their home in Cary. She’s awaiting test results to learn what happened. (According to the Appalachian Trail Conservancy, norovirus has been an issue on parts of the trail.) 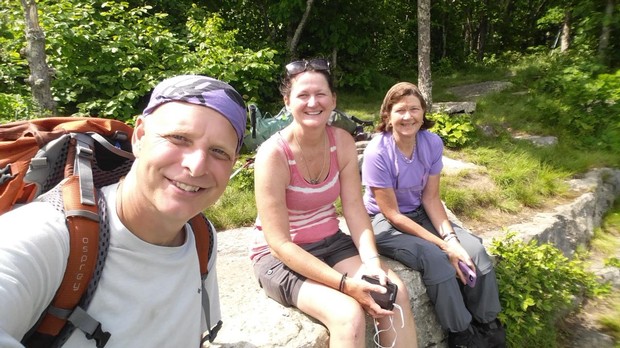 Susan with Mudder and Advil

Last Friday, back in Cary after spending the previous day buying a new wardrobe (“Nothing I had fit anymore”), she contemplated her return to the trail. Ideally, she’d like to keep hiking with Mudder, who goes by Rich Kurnik back home in Durham, and Advil, who is from Salt Lake City. “One is 49, one is 50,” she says, “I can’t remember which is which. But we’re all kind of quiet, and they both love to laugh.” Reuniting, however, would require a partial flip-flop — not hiking the trail in a straight sequence — which, Susan isn’t crazy about.
When she does return to the trail, she hopes it won’t be with 34 pounds on her back.
“I’ve decided I love hiking, but not with a pack. My brother isn’t working, so I’m going to see if he’ll be my support.”
Questions may remain about the how’s (slackpack? flip-flop?) and where’s (resume at Daleville? where Mudder and Advil are at?) and when’s (she’ll return sometime by the end of this month). But there’s no asking “if”.
“It’s awesome,” she says. “It really is.”