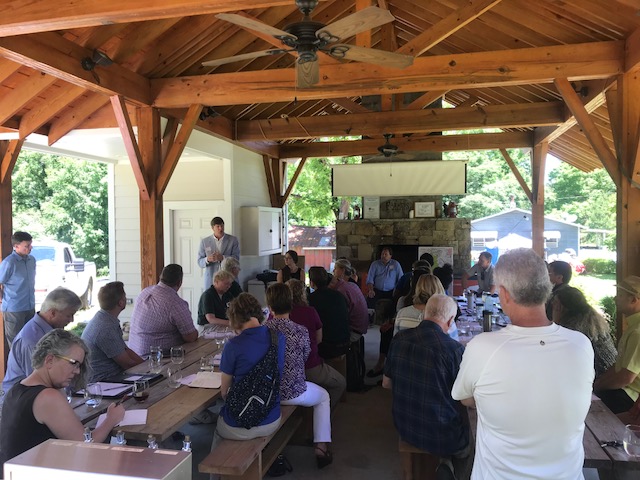 David Knight, standing near the door, at a Listening Tour stop in Raleigh in June.

In January, Knight was named the first director of the N.C. Department of Commerce’s new Outdoor Industry Recruitment Office. His mission: to help North Carolina capitalize on an industry that already:

“We want to show the impact that outdoor recreation has on the state and build on that to bring more outdoor recreation business here,” says Knight, who holds a law degree from Wake Forest University and has a range of policy experience in the outdoors, from serving as director of government relations for The Nature Conservancy in North Carolina to serving as assistant secretary for Natural Resources at the N.C. Dept. of Environmental and Natural Resources (now the Department of Environmental Quality.

One of the nation’s first

When his office opened in January, with funding allocated by the 2017 North Carolina General Assembly, North Carolina was only the fourth state in the nation to have an office promoting outdoor recreation. Six states have since added similar offices. Knight and his Outdoor Industry Recruitment Office are now part of the state’s Economic Development Partnership, whose goal is to bring new business to the state and support existing businesses.

Knight’s “orientation” included holding 13 “listening sessions” across the state, bringing together local officials and folks in the outdoors industry.

“We wanted to find out on the local level what the outdoor industry needs to grow,” says Knight.

Knight’s last session was in September. He’s still sifting through the feedback to file a report with the legislature, but a few key areas of improvement and focus surfaced that Knight believes will indeed help North Carolina grow its outdoor recreation industry. Those areas include:

The economy, and more

And, he adds, outdoor recreation is also an industry that doesn’t negatively affect the state.

“This isn’t an extractive industry,” says Knight. “Outdoor recreation takes nothing out of the state.”

“I think it’s an exciting time for the state to focus on growing the economy on its outdoor benefits.”