The Mountains-to-Sea Trail gets hiked in a day 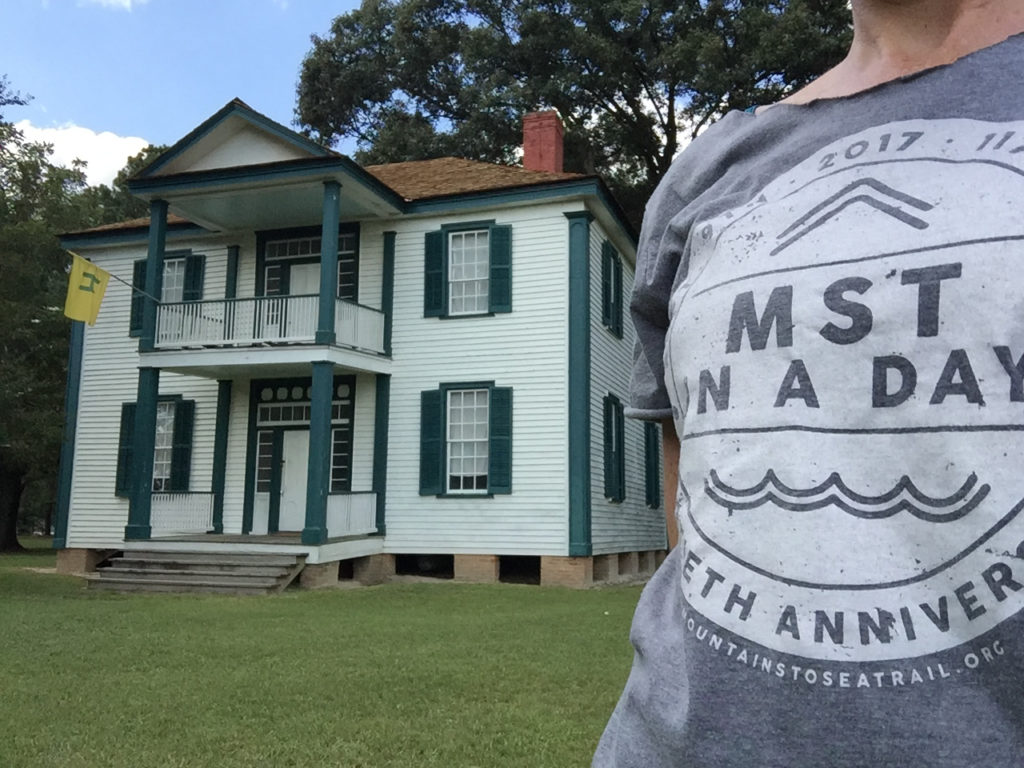 MST in a Day, at the Bentonville Battlefield

The American Hiking Society had never heard of one of the nation’s long trails being hiked in its entirety in one day.

That’s when more than 1,700 hikers, egged on by near perfect weather across the state, hiked every inch of the Mountains-to-Sea Trail. All 1,175 miles, from Clingmans Dome in the Smokies to Jockey’s Ridge State Park at the coast. They started in the dark (our GetHiking! Triangle crew kicked off the day at 12:00:01 a.m.), they finished in the dark. When the day was done, the AHS was busy amending its fact sheet on U.S. long paths.

It was an appropriate day for such a record: 40 years ago on Sept. 9, Howard Lee, at the time the state’s Secretary of Natural Resources and Community Development, appeared at a gathering of the National Trails Symposium in Waynesville and proposed the idea of a statewide trail. Lee, now 83, experienced the fruits of his notion first hand, hiking 5 miles on the trail through Jones Lake State Park.

For the occasion, the Friends of the Mountains-to-Sea Trail divvied up the trail into 20 segments, which were further divided into a total of 300 legs. For the most part, those legs ran three to five miles in length. For the most part.

The longest leg. 21.5 miles, was in the Smokies, its distance determined by a lack of road access in the half-million acre national park. That was tackled by William Rushin, who, what the heck, added another 4 miles to his day (that after hiking 21 miles the day before to reach the trailhead).

Some hikers couldn’t get enough of the trail. Jason Taylor started at dawn at the Devil’s Garden Overlook, the MST’s departure point from the mountains, and hiked ’til dusk, to the Elkin Recreation Center, a distance of 34.3 miles.  (He gives a shoutout to his brother Mark, who met him with a knee brace “after I came off the staggering Wells Knob.”)

Mayors from trail towns along the way, from Dillsboro to White Lake, hiked. Two retired superintendents of the Blue Ridge Parkway hiked. Some people ran, some paddled (on stretches of trail along the Yadkin and Neuse rivers), some used standup paddle boards (on a temporary run of trail on the Northeast Cape Fear River.

There was trail magic: “A patio chair with a sign, “MST Walkers Have a Drink,” reported Greg Yahn, who hiked a road section of the trail north of Greensboro. “The sign was on top of a 5 gallon bucket which had ice with water bottles inside. There were also some snack pack on the chair.”

There was discovery: “I have worked in Hillsborough for 18 years,” wrote Dennis Baker, “and did not know that the Riverwalk trail connected to the Nature Preserve and the speedway. We will be back!”

There was appreciation for the volunteers out blazing the trail: “Love how Elkin, NC embraces the trail and how hard they are working on it,” wrote Diane Griffin.

There was the camaraderie of hiking: “My favorite part of today was making friends with fellow hikers Joel, Bob and Laura!” reported Beth Tornek Schulman of her hike down the Blue Ridge escarpment near Stone Mountain. “They told wonderful stories and were a wealth of hiking information!”

There was the unexpected: Hiking a road section in the Coastal Plain, Matt Hawk, reported he  “went by a yard sale that had nothing very interesting except a Minion costume. Didn’t fit, though.”

And, in the end, there was success. The first time a U.S. long trail had been hiked from end to end in one day.

We’d have to agree.