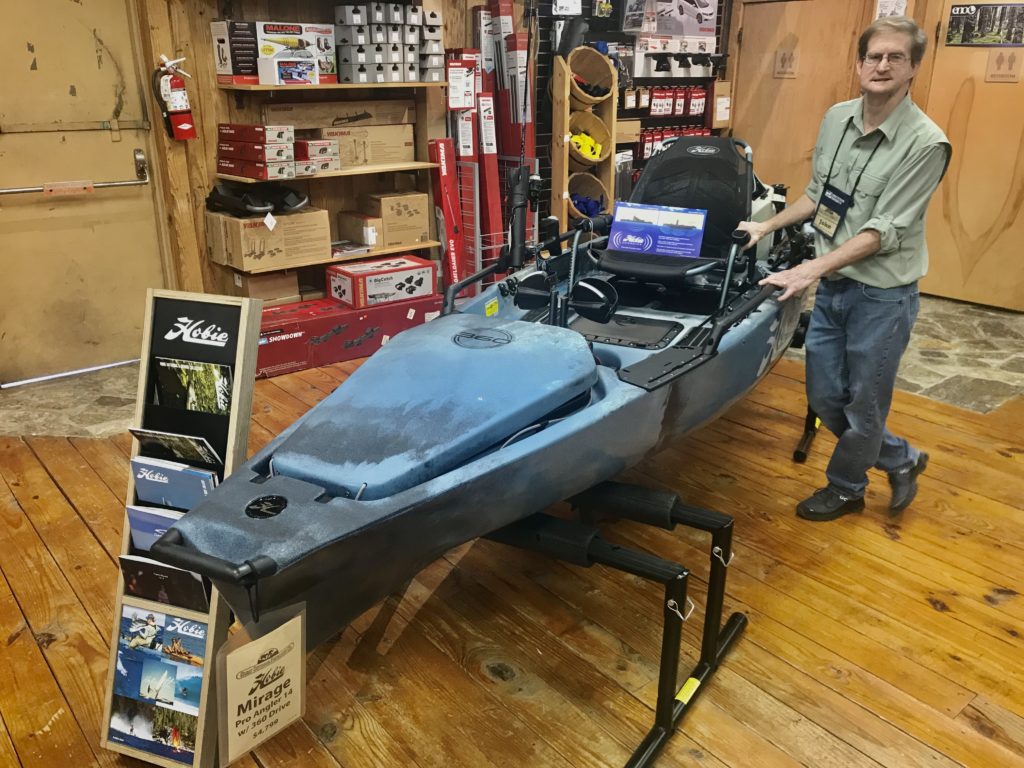 These fits and starts of warm weather, the spring peepers beginning to call from vernal ponds, the spring beauties and trout lilies now working their way skyward, they’re all signs of impending spring. And the start of the kayak fishing season!

If you’re as excited as we are by the warming weather, hold on to your fishing hat because we’ve got some new gear in our stores that will make you even more eager to get out on the water — if that’s possible!

A bit of sticker shock, eh?

Fishing kayaks have become the sports cars of the paddling world. Lots and lots of bells and whistles — lots and lots of useful, helpful bells and whistles — but you’ll pay for them. You don’t question their worth: you look at all the gadgets, from tackle boxes that pop up between your legs to accessories ranging from rod holders to camera mounts, and see how you could use all of them. Just one thing:

How on Earth will I get a $3,000 fishing kayak past the “House Budget Committee”?

Ah, but what if that appropriation was a mere $729, for a boat that wouldn’t bankrupt you but would give you many of the features that make life on the water so much more fun?

“You get a lot with this boat,” says John Upchurch with the Paddlesports Department of our Cameron Village shop in Raleigh.

“This boat” is the new Perception Outlaw 11.5, billed by Perception Kayaks as “The newest generation in affordable fishing.”

John digs into the Outlaw’s features. “It’s a sit-on-top, but the seat also pops out easily so you can use it as a standup. And if you prefer to use it that way, you can put a cooler where the seat was and use it for a seat.” He demonstrates by popping a 35-liter Yeti cooler snuggly into the vacated seat space.

“It hasmolded handles that can easily be used as a secondary paddle holder that keeps the paddle elevated and within reach,” especially helpful with a standup paddle. “It has side handles that double as gear tracks, and its got molded-in trays and cup holders to keep beverages and other essentials in easy reach.”

It’s also got lots of storage, with bungeed storage wells in the bow and stern (the one in front includes a mesh cover), as well as under the seat.

And when you get to the point where you want to add electronic fish-finding to your game, the Outlaw 11.5 also has a transducer scupper on the the hull.

At just 11 feet 6 inches and 77 pounds, the boat fits easily in the bed of a pickup,

Astral V-8 Fisher PFD: Safety and then some

Speaking of your House Budget Committee, in addition to new purchases, we’re guessing they also must approve purchases for gear upgrades. That being the case, we suggest you put the Astral V-8 Fisher on the agenda for your next round of appropriations. 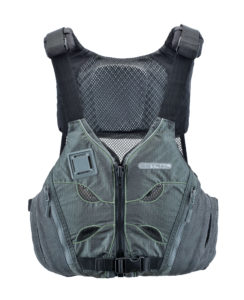 Why the V-8 Fisher? If you’ve been paddling long, you’ve likely replaced most of your vital gear, save for the PFD. And likely, when you started out, you viewed the PFD as more of a necessary evil, what with it’s bulky build interfering with your cast and making you sweat like the dickens on even a moderately warm day. Plus, after buying all your other essential gear, you likely didn’t have a lot left over to spend on a PFD. So you went cheap.

Now’s the time to upgrade.

For starters, this PFD is comfy, with only straps going over your shoulders and mesh construction wherever possible — the latter helping to vent heat and shed weight (it weighs in at just under 22 ounces). Also under the heading of weight and comfort, the back is mostly mesh, with only the top third foam flotation. That allows you to rest your back directly on your seat back, a more comfortable, less sweaty situation.

But what really makes this vest is the pocketry. A left side pocket allows quick, easy access to pliers, a zippered right side pocket holds your snacks, and a clip secures your keys. Two slit pockets near the upper straps let you store your knife, or a Slim Jim. Your vitals are right there, on your vest, in easy reach.

Now, this might be the time you would expect to plead before the HBC that you can’t put a price tag on safety. But you won’t have to, because the Astral V-8 Fisher is just $129.

Let’s say you’re fishing a small cove. The conditions are excellent — except for that persistent wind that keeps blowing you this way and that, refusing to let you hold your ground. Even though Jim has experienced such conditions many a time, he’s smiling, because he knows the story now has a happy ending. That happy ending is the new Hobie Mirage Pro Angler 14 with 360 Drive Technology.

Suffice it to say that this boat comes with all the innovation kayak fishers have come to expect from a boat designed by engineers who fish (or is it fishers who engineer?) — with one brilliant new addition.

“So you’re being buffeted around,” Jim says. “Before, you either had to fish and try to contend with impossible conditions, or paddle the boat into position, then hope you could transition to fishing fast enough. You couldn’t do both at the same time.

“With the old pedal boat technology, you could only go forward or backward. Now,” Jim says, “there’s this little lever off the left of your seat that lets you rotate the flappers 360 degrees.” That means if the wind is plowing into your port side, you can rotate your kick-up fins — Hobie uses a pair of underwater flappers on its boats — to pedal into the wind and counter its effect.

“That’s what happens,” says Jim, “when the fishermen who design your boats are also engineers.

“Pedal boats in general increase the time you’re actually fishing in the boat by two to three times,” says Jim. “This boat makes it even more so.”