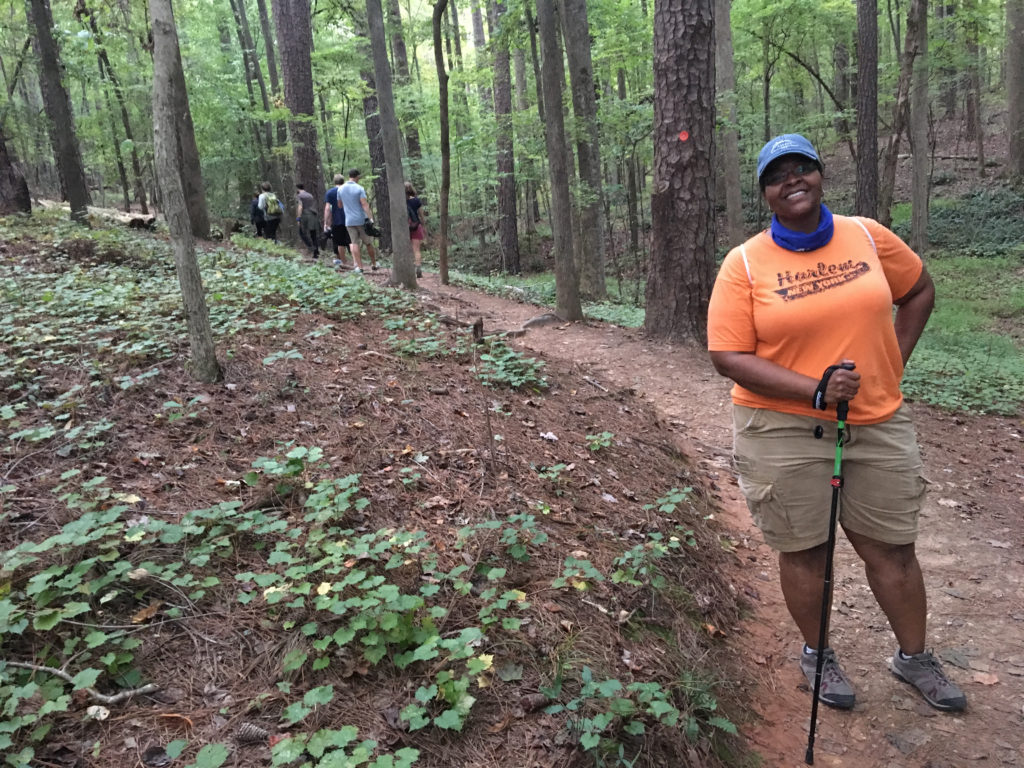 For the next few weeks, we will profile hikers new to the trail. Most of the hikers you’ll read about will be participants in Hike NC! a new statewide hiking program aimed at beginners and sponsored by Blue Cross and Blue Shield of North Carolina, N.C. State Parks, Friends of State Parks, N.C. Recreation & Park Association, Great Outdoor Provision Co. and GetGoingNC. Today: Kimberly Dixon of Raleigh.

Why hike? For Kimberly Dixon, the reason is simple: because she can. Finally.
Born with bowed legs, the increased pressure on the Walnut Cove native’s knees caused arthritis to flare by the time she was 12. She had to give up sports, and simply getting around soon became a challenge. When she was 32, a doctor told her she needed knee replacements. He also told her she would have to wait: she was too young. Knee replacements at the time lasted about 15 years, and they could only be done once. Her condition grew progressively worse.
“I remember one spring day in my 30s,” Kimberly says. “The temperature was 70 degrees, there wasn’t a cloud in the sky. I wanted so much to get outside, but I couldn’t even get off the couch. I just cried.”
In 2010 she was on a flight from California back to Raleigh, where she now lives, when a uniformed Army officer sat next to her. He looked her up and down, looked at the cane she relied on. “What’s your story?” he asked.
“I told him and he replied, ‘I can’t give you any details right now,’ he told me, ‘but wait about three years. Something is coming.’ ”
About three years later, the Army doctor’s prognosis came true. While noodling around on the Duke Orthopaedics website, she came across a new knee replacement technology that promised 25 years of use, with the additional promise of replacement after that. In March of 2015, she had her right knee replaced, the right followed in December.
What was the top priority for Kimberly and her new knees?
Hiking.
“When I was growing up,” she recalls, “my brother was a Boy Scout and he would lead us on trips into the woods,” the woods of Walnut Cove being in the shadow of Hanging Rock State Park. “I love being in nature, of seeing God’s creations.”
With her new knees, she began walking a quarter-mile course around her neighborhood. “It was all I could do some days to make it all the way around.” Labor Day weekend, she felt she was ready for a full hike, so she and a friend drove up the Blue Ridge Parkway, pulled over at the Graveyard Fields access, and hiked the mile or so to Lower Falls and back. It was the dream of more than 30 years fulfilled.
Wednesday was her second hike, on the 2.7-mile Sal’s Branch Trail at Umstead State Park in Raleigh. The hike was the first in the Triangle as part of Hike NC, a new initiative by Blue Cross and Blue Shield of North Carolina, N.C. State Parks, Friends of State Parks, N.C. Recreation & Park Association, Great Outdoor Provision Co. and GetGoingNC and others aimed at getting new hikers on the trail. More than 60 hikes are scheduled over the next couple months statewide (find a rundown of the hikes, here).
Hiking with one trekking pole (with some prodding, she agreed to try hiking with two on her next outing), Kimberly kept a good pace. She spoke about the nearly year-long process of breaking in her new knees, of the blog she writes about her experience (bowlegsandarthritis.com), of the life coaching business she’s established, Joyful Living with Kimberly Dixon, to help others in a similar position. She talked about why, regardless of weather, regardless of how sore her legs might be, she continues to walk the quarter-mile course around her house.
“I walk every day for this right here,” she says of Wednesday’s hike in the fading afternoon light at Umstead.
Right now, Kimberly says she doesn’t have a bucket list of hikes or a grand destination. That she can simply walk is enough for now. That and the fact she can finally walk in the woods, like she did as a child back in Walnut Cove.

Learn more about Hike NC! and sign up, here.