Gearing up to climb a Fourteener — at our Greenville store

It was the day before William Fike was to leave for Colorado to attempt the state’s highest peak, 14,440-foot Mt. Elbert, when he got some concerning news.

“They’d been hit with a big snowstorm, up to three feet in spots,” recalls William, who manages our Greenville store. Late spring snowstorms aren’t uncommon in the Colorado mountains. Still, three feet — that was a lot.

Already packed and ready to go, William swung by the store — a store near the North Carolina coast, mind you, where snow any time of year is a freak occurrence — and grabbed a piece of gear that would save his trip and make summiting possible: a pair of Yaktrax Pros, a cleverly designed web of coiled steel and rubber that slips over a pair of boots or shoes to provide traction on snow and ice.

“We had one pair, and they had been sitting there a long time,” William says. “But we had them.”

William, an avid climber, had a pair of crampons but, as it turned out, they wouldn’t have been much help. “Crampons are great on pure ice, but not on a mix of rock, crusted snow and ice,” which is what William ran into above treeline, at 12,000 feet. He also had access to a pair of snowshoes, but a climber descending from the summit as they were starting out said they would be overkill. Yaktrax were just the ticket.

That his store could not only help with outfitting every adventure imaginable close to home, but could also help him bag his second 14,000-plus-foot peak (several years ago he climbed Washington’s 14,411-foot Mount Rainer) is a source of pride for William. And it wasn’t the only piece of gear from the store that played a key role in his summit bid. 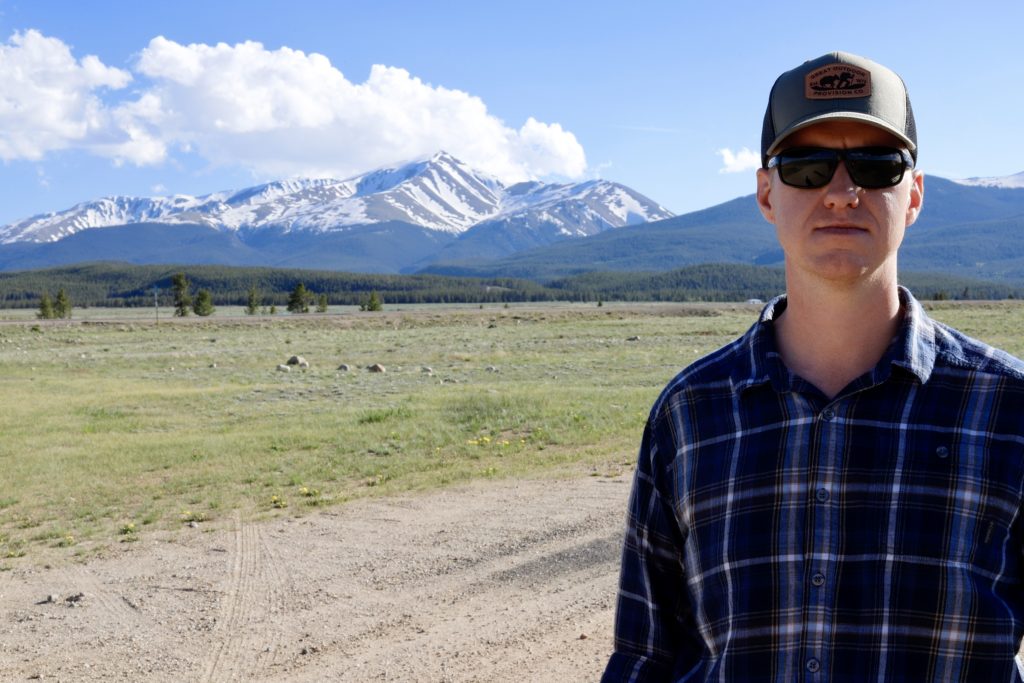 William, with his destination in the distance

To help with the challenges of a hike that gains 4,700 feet of elevation in just four-and-a-half miles over rocky, icy, snow-covered exposed terrain, William used his trust Black Diamond Trail trekking poles. “They’re lightweight, very adjustable and they come with both Trekking Baskets for hiking dirt and rock, and Powder Baskets for when you’re in deep snow and don’t want to poke through.

“I use them around here, too,” says William.

That mix of grit and rock and melting snow — it was 80 degrees at the trailhead, says William — could have wreaked havoc with his feet. Fortunately, he was wearing Outdoor Research gaiters. Their snug fit over his shoe laces and boot top did a good job of keeping out the unwanted. And that included excessive heat build-up, with their rugged-yet-breathable construction.

It may have been 80 at the trailhead, but as he gained altitude, the temperature dropped a good 20 degrees and the wind picked up. Occasionally punching through the deep snow, it would have been easy to drench his pants. Which is why, William says, he opted to wear his Kuhl Renegade Pants.

“They’re water-resistant, which came in handy when I was post-holing,” says William, “and the fact that they’re soft-shell and shed wind helped up top.” The UPF 50 sun protection also helped immensely at an altitude where the sun’s rays are intense. And they’re construction to accommodate an athletic build comes in especially handy climbing a mountain.

Another concern on this hike was water. Four-and-a-half miles may not sound like that much, but the altitude and dry air of the West sucks the moisture out of a body. William knew he’d need a good 5 liters of water for the hike and was able to do so, with a pair of 1-liter bottles in his pack pocket and another 3 liters in his Platypus reservoir.

And you can’t underscore the importance of eating well on a rigorous mountain trek. William used his two-pot MSR cookset, which includes two pots made of ultralight hard-anodized aluminum, one of which has a nonstick surface, which is great for cooking on the trail. For cooking things like cut-up potatoes and summer sausage. Or Spam.

“A lot of people aren’t crazy about Spam,” says William. But he guesses that’s because they’ve never had it cooked. “It becomes more savory when you crisp it up,” he says. “It’s like a hot dog. You can eat it raw, but it’s so much better when you cook it. Cooking it takes away its cold mushiness.”

But even crispy Spam can’t hold a candle to William’s favorite trail meal: ramen and tuna.