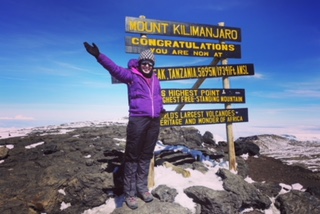 This year, with GetGoingNC.com, we’re holding a series of monthly talks with local folks who have taken some pretty cool adventures. Our Explorer Series is intended to let these explorers share their experience, from inception to preparation and planning, to the adventure itself. The goal is to make these experiences seem not as daunting as you might think — to perhaps inspire you to act on that epic adventure that’s been rattling around in the back of your head.

Our first Explorer is Julie Steiner. As a child watching a nature show on TV, the image of Mount Kilimanjaro captured Julie’s imagination. At 19,341 feet, Kilimanjaro is the highest point on the African content, a massif so massive it encompasses five ecozones. An avid international traveler, when Julie was planning her big adventure for 2017, that childhood image of Kilimanjaro reappeared: coupled with a desire for an ambitious physical challenge, Kili seemed a lock. She began her training in February of 2017 with our GetBackpacking! Intro to Backpacking Class.

Here’s a bit of what we learned from Julie’s presentation at our Chapel Hill shop on Jan. 20:

“Everyman’s Everest.” Kilimanjaro gets the name because unlike it’s most prominent Seven Summit sibling, Kilimanjaro is considered accessible to a much larger number of people.

Seven routes to the summit. There are seven popular routes to the top of Kilimanjaro. Some take as few as 4-5 days (the success rate on these is lower because there’s less time to acclimatize). In part because of that factor, in part because it’s considered the most scenic, Julie chose the 8-day Lemosho Route.

Failure spells success. During her training for Kilimanjaro, Julie did three multi-day backpack trips. The first two “went great,” said Julie. “Then there was Linville Gorge. That was a disaster. “I became so dehydrated and was cramping so bad the first day that I didn’t realize I had the worst blisters ever.” She had to be taken out of the gorge by one of her guides. “It was a make or break moment. I was just 45 days out from Kilimanjaro. I thought, “If I can’t do Linville Gorge, how am I going to do Kilimanjaro? She decided to swap out a pair of boots that weren’t working for her and learned all she could about blister prevention (she emerged from Kilimanjaro blister free). Linville Gorge, said Julie, “turned out to be one of the greatest learning experiences.”

Equipment fail. Her gloves for the summit. “They were so big I couldn’t hold my hiking poles.”

Group demographics. The group Julie climbed with included six women and five men, ranging in age from 21 to 72. Her group had 44 porters and guides.

Toilet tent vs. “long drop latrine.” Julie’s group had a choice of using the traditional “long drop latrine” or pitching in $200 for a toilet tent. “I’d heard people say that if you use the latrine, plan to take an extra pair of shoes” exclusively for that purpose. She and three women pitched in $50 for the toilet tent.

Why Julie chose October to summit: “That’s right after the peak tourist season. There were people, but it wasn’t crowded.”

Chapped lips. Julie’s only injury on the climb.

Day 2. That’s when Julie’s group got their first sense that there was a mountain in the area. “It’s called the mountain that hides” because it’s constantly enveloped in clouds.

“Sending a message.” That’s Kili code for going to the restroom. “And you send a short message or you send a long message. I do not know why.”

Help! Heading up to the summit, Julie had to send a message, a short one. A porter pointed her toward a boulder she could hide behind. “I was able to get my first layer back up,” Julie said. “But I needed help with the other five. The porters,” she added, “you simply couldn’t do this without them. They’re feeding you, they’re giving you water. They’re doing things you wouldn’t think to ask someone to do for you.”

Summit day. Julie said her group went to sleep at 8 p.m., there were awakened at 11 p.m. and on the trail by midnight. The three-mile hike to the top took 8 hours. For her summit bid, Julie wore 6 layers below the waist, 8-9 layers above, to deal with temperatures in the teens (not including windchill.

15 to 20 minutes. That’s how long you’re allowed to stay at the top, said Julie. “Then they start pulling you down, literally pulling you down. “There was a porter on either side of you, holding both arms, with your feet barely touching the ground. It was hurting my back, so I tried to get them to put me down.” A mis-interpretation of sign language ensued: an porter appeared and gave her a piggyback ride down.

Pep talk to the top. On the grueling 3-mile push to the top, Julie said she kept herself going by thinking of all the worse things people through history had gone through. “‘This is my choice,’ I told myself. It will be over in 24 hours. It’s pretty awful. It’s the worst day and the best day of your life.”

Cost? Cost of the trek alone, not including airfare and other expenses, was around $4,000.

What to pack. Julie shares her packing list here.