Does Age Matter On the Trail?

Jaala Freeman: The stereotypical hiker–a 20-something person, with a moderate level of outdoor experience, physical fitness and a sports-like demeanor. 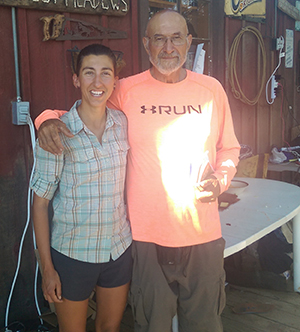 Reality, however, shows the hiking community to vary widely in age, occupation, experience and fitness levels. People in the backcountry fit no other criteria than a desire to be outdoors. For many reasons more and more people find themselves wanting to spend time in the woods–to see the views, to be healthier, to see wildlife, to have an adventure…The thru-hiking community is just a small subset of this larger group. Every year the people you find out here will surprise you, particularly in age. Amidst the 20 and 30-somethings there are many in their 50’s and 60’s, that some would say are too old to attempt a 2,000-mile hike.
Lord Byron is one such PCT hiker. At “68.9”-years-old, when asked why he came out here, immediately he responds, “To find out what it means to be an old man.” In a group of hikers, most of whom are less than half his age, his pleasant disposition fits right in and his jaunty walk is the only thing that alludes to his real age. Yet on any given day Lord Byron is probably ahead. He is diligent about getting out early and his positive attitude takes him beyond where others quit. 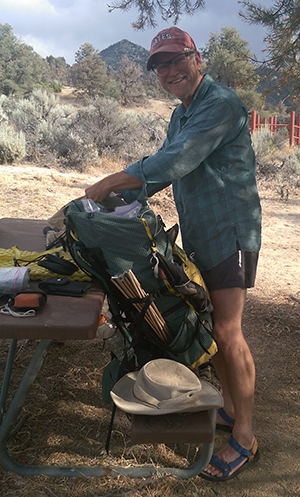 Though he realizes that his body has limitations, he feels the “old” label simply does not fit who he is or how he wants to live. “I identify more with people in their 40’s than people my own age,” he says, “but I can’t do everything they do.” So he hikes the trail to redefine “old”, perhaps more as a state of mind than a state of being.
Another atypical hiker, Beekeeper has dreamed of hiking the Pacific Crest Trail for 30 years. A lifelong hiker, finally, at 58, it’s all come together. He spent over 3 years planning, unlike most hikers who take a year or less to plan. Living in Washington state, he had the opportunity to meet thru-hikers when he started trailangeling near his house 3 years ago. He thought he was too old to thru-hike, but the first hiker he gave a ride to was a man in his 60’s, which caused him to seriously consider his own thru-hike.
When he started, April 22nd, his mind was all over the place, so much so that he considered just going home. But he made it to the southern terminus and just started walking. When asked what the trail has provided for him he said, “It’s given me perspective and a chance to clear my head.” A strong hiker to begin with, he says, “I feel younger everyday!” And it shows, especially in a group of hikers, when his tempered chuckle permiates the air around the campfire. He says, “The best part of the hike is laughing every day.” It’s as if the trail shaves off years of age physically and relationally, so Beekeeper becomes just a fellow thru-hiker. 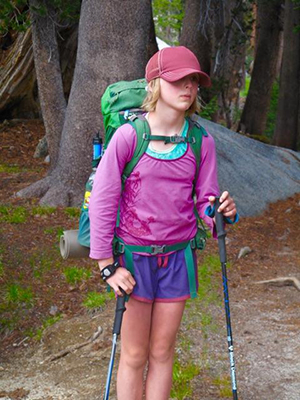 At the other edge of age is 11-year-old Rabbit. She’s got at least 1,500-miles under her belt, with a thru-hike of the John Muir Trail (JMT) and about half of the PCT now completed. On the JMT with her parents, Rabbit had the chance to meet several PCT thru-hikers and decided that she wanted to thru-hike the PCT as well. In fact, to her parents’ surprise, she put it on her Christmas list! When asked why she wanted to do a thru-hike specifically she said, “It’s fun to walk; I like it more the longer I’m on trail.”

More energetic than most of us, Rabbit can be found swinging on tree branches and doing push-ups on breaks when the rest of us collapse on our packs. She has her tough days though, like everyone else. When the day starts out rough she says, “I just woke up on the wrong side of the tarp.” Early on she realized the trail would have mental and emotional challenges–hiking a portion without her mom and missing friends back home. However, her bashful nature in the beginning has now transformed into an underlying confidence. Rabbit has slowly become more overt about what she thinks and what she wants than when we met 1,100-miles ago. She’s concerned about mileage and weather, just like every other thru-hiker. So she’s gradually grown from an 11-year-old on trail to a fellow thru-hiker.

Whatever a hiker is, the stereotype doesn’t really seem to fit the PCT, and age is possibly the least significant feature of a thru-hiker.  To speak about average age is almost impossible with such a varied group. But to see how hikers relate to one another shows a common ground. Perhaps hiking provides a chance to relate on a more equal level, where age is less significant, simply because we all just want to be out here.