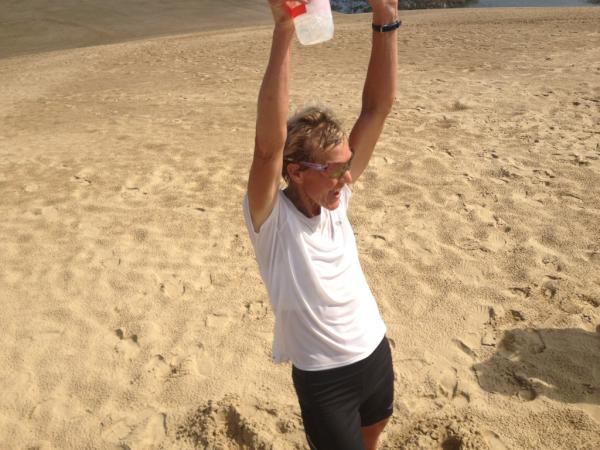 What began with a casual inquiry at a reception last October ended at 9:29am this morning when Diane Van Deren took the final steps up an 85-foot sand dune at Jockey’s Ridge State Park, 22 days, 5 hours and 3 minutes after leaving Clingman’s Dome on the Tennessee border. Her journey on the nearly 1,000 mile Mountains-to-Sea Trail set a record for the fastest crossing of the statewide path, beating by nearly two days the previous record of 24 days, 3 hours and 50 minutes set last year by Matt Kirk.

“Kate Dixon,” the 52-year-old Van Deren yelled as she ran the last few yards up an 85-foot dune, “that is a long, long way to go!” Moments later she embraced Dixon, executive director of the Friends of the Mountains-to-Sea Trail, which benefited from Van Deren’s MST Endurance Run.

Van Deren began the day on the trail at 4:26 a.m., with 23 miles to go. The plan was to reach Jockey’s Ridge by 11 a.m. But unlike previous days when it had taken Van Deren 30 minutes to an hour to rev her body up to race pace, she started this morning out of blocks.

“When we got to the downhill part of the bridge” — the 2.5-mile Bonner Bridge over Oregon Inlet — “she took off,” said Christian Johnstone, one of her trail guides for the day.

In the first two hours Van Deren did the equivalent of a half marathon — 13.1 miles — in two hours.

At about the 10-mile mark, she began asking for periodic location updates from expedition coordinator and trail guide Chuck Millsaps. Around the 5-mile mark she asked for a phone and called her husband, Scott, her best friend back in the Denver area, Barb Page, and her manager at The North Face, Lisa Burnes.

At the 3-mile mark, at NC12 and NC 158, she met her support crew one last time. After getting water and checking her severely blistered feet, she asked for a moment.

Less than a half hour later she was standing atop Jockey’s Ridge.

“That is the hardest thing I have ever done,” Van Deren told a small gathering on the dune. “The only way I was able to do it was because of my team.” She then pulled them together for a group shot: Millsaps, Dixon, Support Crew Chief Joel Fleming and trail guides Sarah Millsaps, Russell Burke and Johnstone.

The declaration of being her biggest challenge yet comes from an athlete who has done the Hardrock 100, said to be the hardest 100-mile ultra race out there, seven times, and who did the 300-mile version of the Yukon Arctic Ultra and had so much fun that she returned the following year for the 430-mile version.

For record keeping purposes, Van Deren’s run began May 10. In reality, it began back in October when she was in town as part of The North Face Never Stop Exploring Speaker Series. After sharing her story of battling through epileptic seizures to morph from a pro tennis player at the beginning of her career to an elite ultra runner 10 years ago, Chuck Millsaps with event sponsor Great Outdoor Provision Co., introduced Van Deren to Dixon.

Van Deren wasn’t familiar with the Mountains-to-Sea Trail, so Dixon obliged with a quick elevator speech. Then, because she thought the ultra runner might be interested, she mentioned that a record had just been set for fastest crossing of the nearly 1,000 mile trail.

Van Deren submitted a proposal for an MST expedition, The North Face approved it, and in January planning began in earnest for the MST Endurance Run.

Recounting her journey across North Carolina — a journey that included fording waist-high creeks in the mountains and a tropical storm and tornado at the coast — she mentioned getting one tick somewhere along the way.

“One tick?” Jockey’s Ridge Superintendent Debo Cox asked. “If you ran all the way across North Carolina and just got one tick, then you set another record.”

Cox then spared Van Deren and her weary legs the agony of slogging through a half mile of sand back to her support vehicle with a ride in his ATV. Once again, Van Deren was grateful, this time for what lie ahead.

“I’m going to take a shower and shave my legs.”